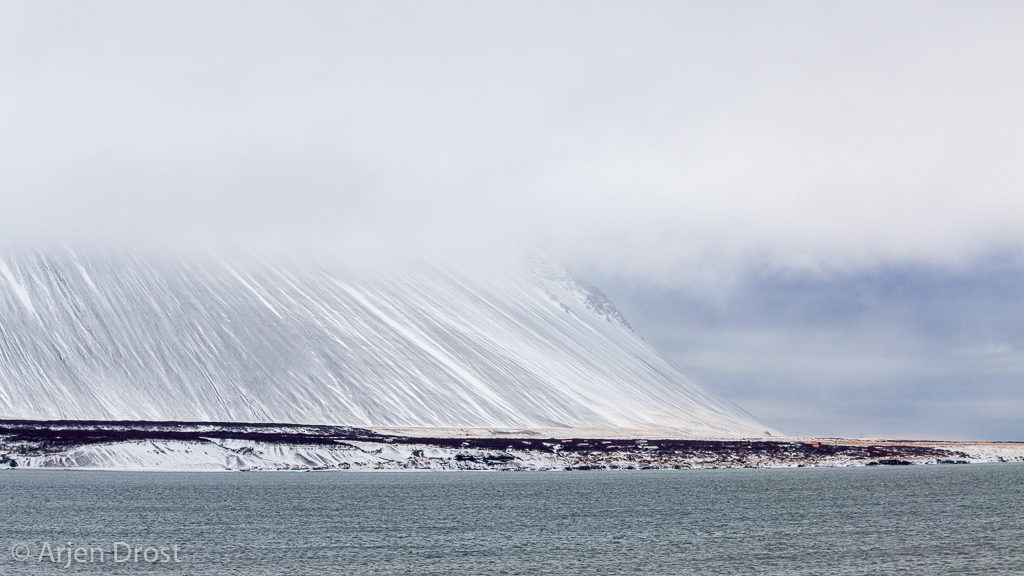 The most spectacular thing of the Arctic is not the Polar Bears, or the vast fields of ice or towering glaciers. No, the most spectacular thing (in my opinion) is the Aurora Borealis, the Northern Light. I’ve seen the Aurora several times already, when I studied in Umeå, Sweden, on expedition cruises in East Greenland and even one time at home in Groningen. However, I still don’t have decent pictures of it. As this year shows a peak in Solar activity, we decided to go to Iceland, a place close to the Arctic circle so a good spot for seeing the Northern Lights. We picked a spot far away from civilisation, so we would not be bothered by any artificial light and have the best view on this phenomena. We found a  small cottage in the far north western corner of Iceland, in the Vestfjord, called Heydalur. This turned out to be both a good and a bad decision. Bad, because it’s really hard to reach in winter. It took us a long time to get though the mountains, especially as we ended up in a snow storm. With hardly any visibility due to low clouds and drifting snow we missed a snow dune and ended up needing  a snowplow to get us out again… 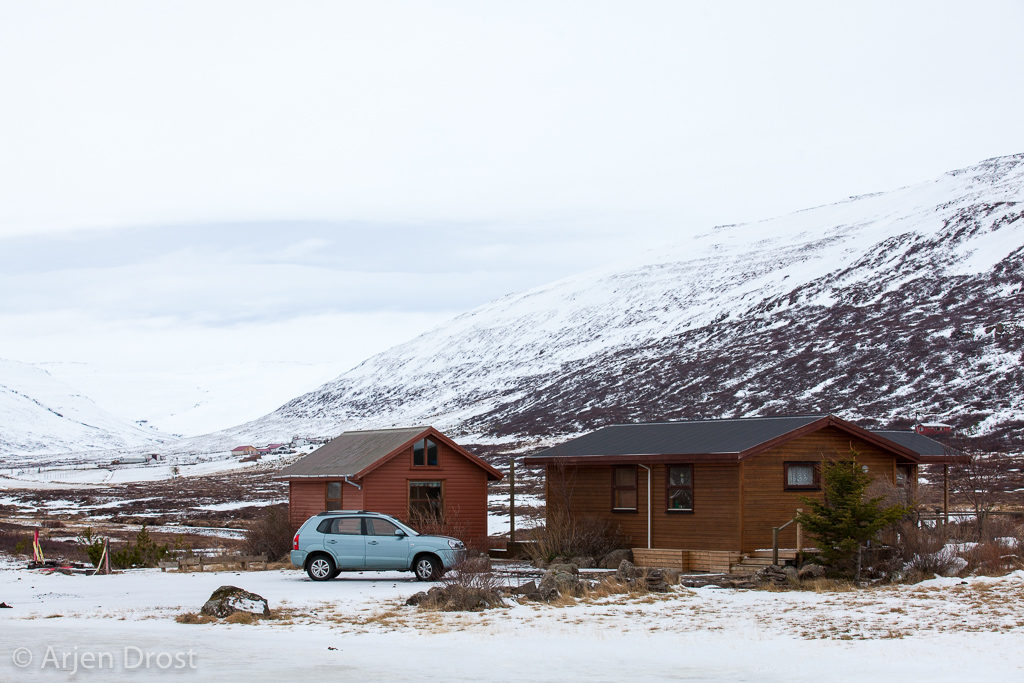 But when we reached our cottage, it turned out to be a really nice place. Nice scenery in winter setting, mountains, fjord and nice wildlife added to it. There was only one thing missing, the Aurora… We had the bad luck of having overcast weather all the time we were there. This meant we had good nights, as the chances of seeing the Aurora were very slim and we could go to bed early. As the roads were very difficult due to snow and ice, we were very happy with our 4×4 so we could explore the area. First we stayed near the cottage and the fjord nearby. The scenery around the cottage was really beautiful, with a nice branch of the fjord and nice snow covered mountains surrounding them. It would have been perfect to take pictures of the Aurora, if we ever had the chance… 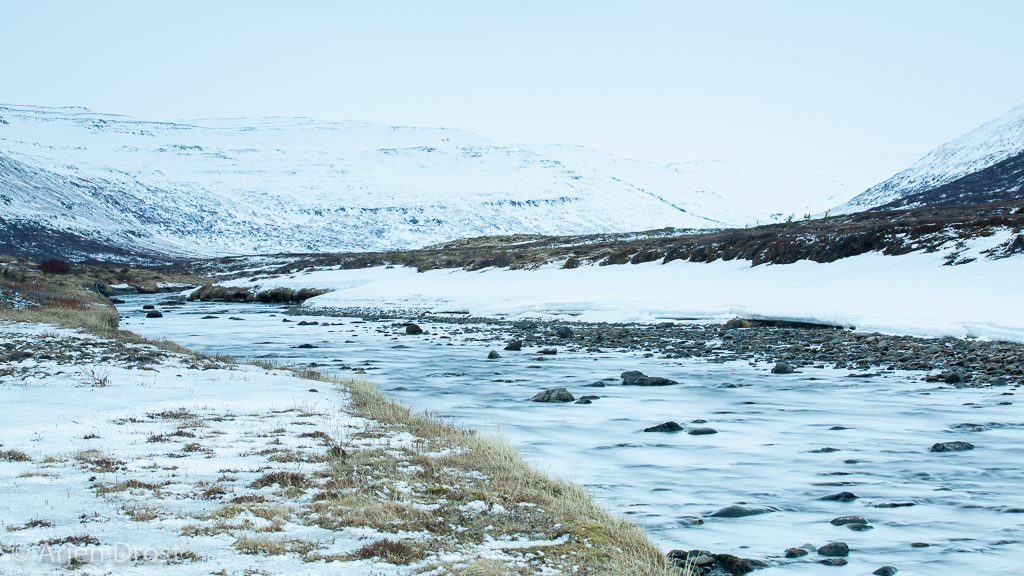 Stream near our cottage at Heydalur, Iceland

A little bit further out in the main fjord there was some more wildlife. Eiders, Harlequin Ducks, Raven and some seals. With a little patience the latter were willing to pose in front of the camera. One of the disadvantages of our cottage (which was also the reason why we picked it) was that it was far away from civilisation. Great for a wilderness experience, but less if you need to get your groceries. There are villages following the road in either direction, but for one it would mean we would have to get back over the mountains, which wasn’t a great succes the first time… So we decided to go to Ísafjörður, the ‘capital’ of Vestfjord. Quite a long drive away, but not a bad one, following the fjord most of the time. Beautiful sights, birds and seals again. Ísafjörður was a little disappointing however. A small harbour nearby posed some more options for photography of gulls and ducks. 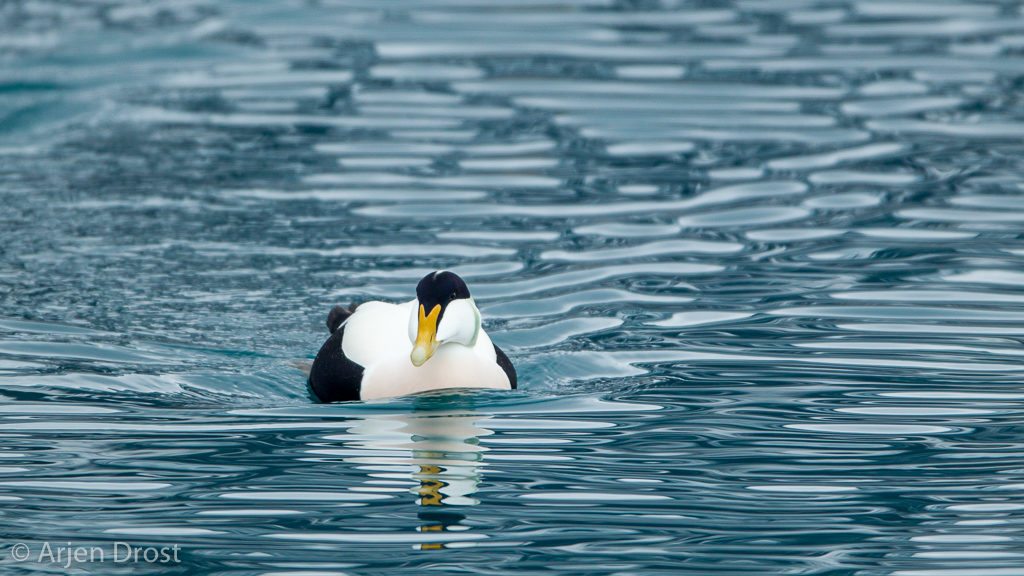 At one night the weather forecasts seemed a bit better. There were a few clear spells expected, so I decided to stay up a bit longer. And indeed, the clouds did break, one time even enough to see the complete Big Dipper. Unfortunately these gaps were only temporarily and the sky remained black… However, while standing outside, I did hear one of the nicest sounds of the Arctic: the barking of an Arctic Fox. I knew there were Arctic Foxes on Iceland and I would really like to see them. I’m used to Arctic Foxes on Spitsbergen, but they are nearly all ‘white foxes’. These foxes are pale brown in summer and pure white in winter. In Iceland the ‘blue fox’ is by far the most common one. These foxes are dark brown during the whole year. Hearing one meant that they were around, however seeing them would be nearly impossible in the darkness. 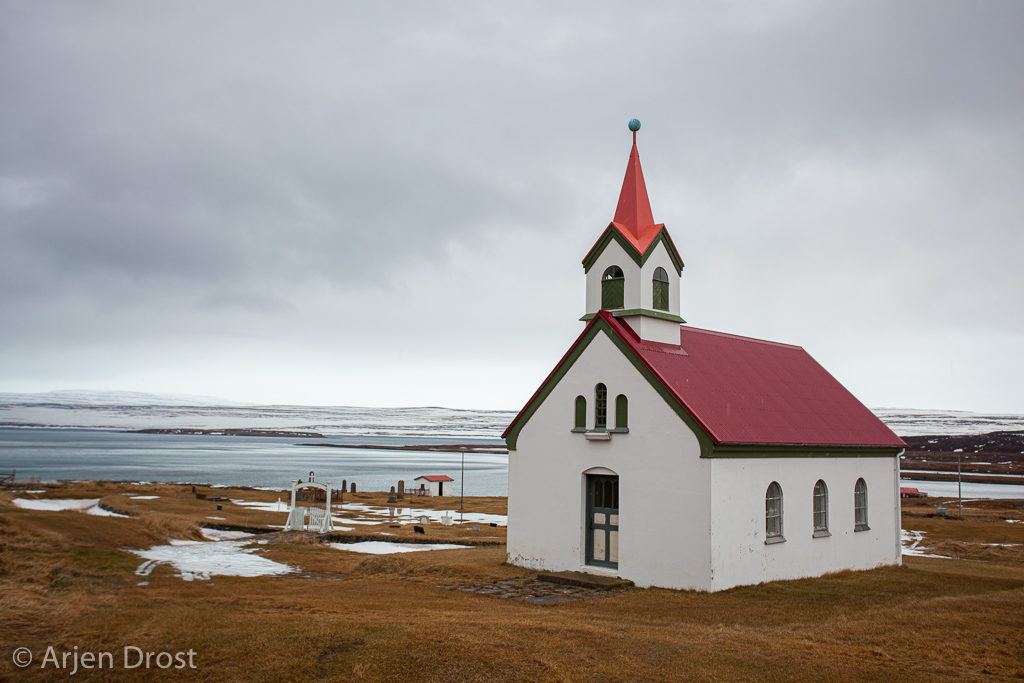 The next day we spent in the surrounding of the cottage again. During one of the first days we saw some Whooper Swans on a small frozen pond. Today we had a look if we could find them again for some nice pictures. This worked out fine, we saw several swans with nice reflections in the icy pond. When we returned to the cottage and went for dinner in the restaurant nearby, I couldn’t help but ask if there would be any place where there was a higher chance of seeing Arctic Foxes. I never expected the answer that I got. “Be here in front of the door, tomorrow morning between 9 and 10.” Despite the surprising answer, we decided to have a try the next morning. And indeed, we had just arrived and there he was: a ‘blue’ Arctic Fox. Soon it became clear why its behaviour was so predictable. The door of the restaurant opened and some leftovers were handed to the fox. He stayed around for a bit and then moved on doing his thing.
That evening I asked for the story behind this fox. It turned out its parents were shot and he and his brother were adopted by one of the waitresses of the restaurant. The brother died, but this one was still alive. Living freely now, it was probably the one I heard the previous night, he just comes by the restaurant every day for a quick bite. 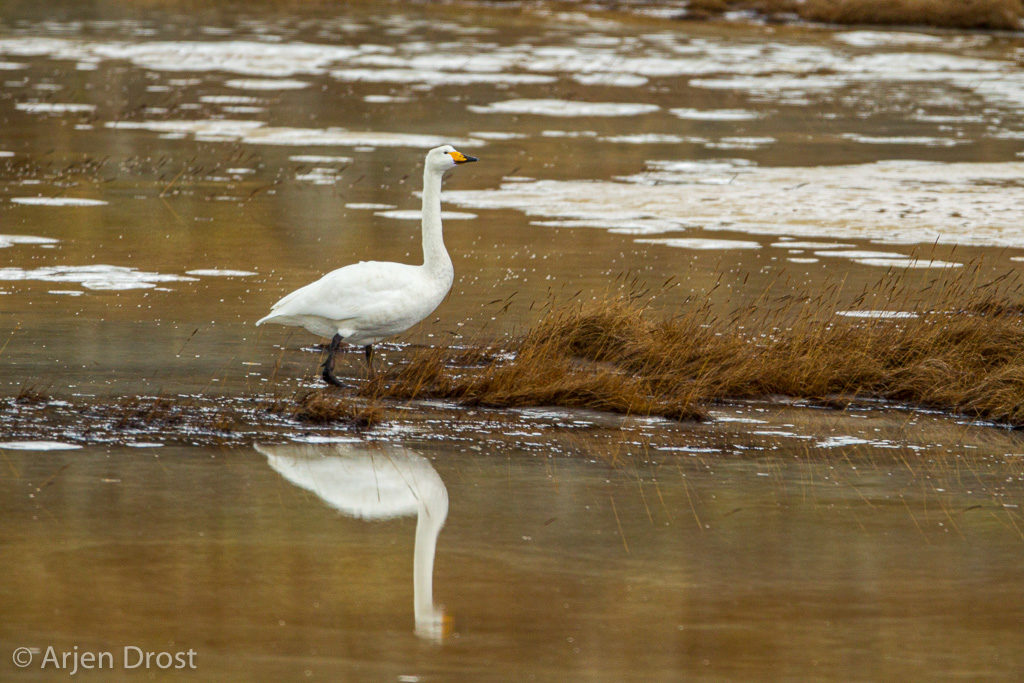 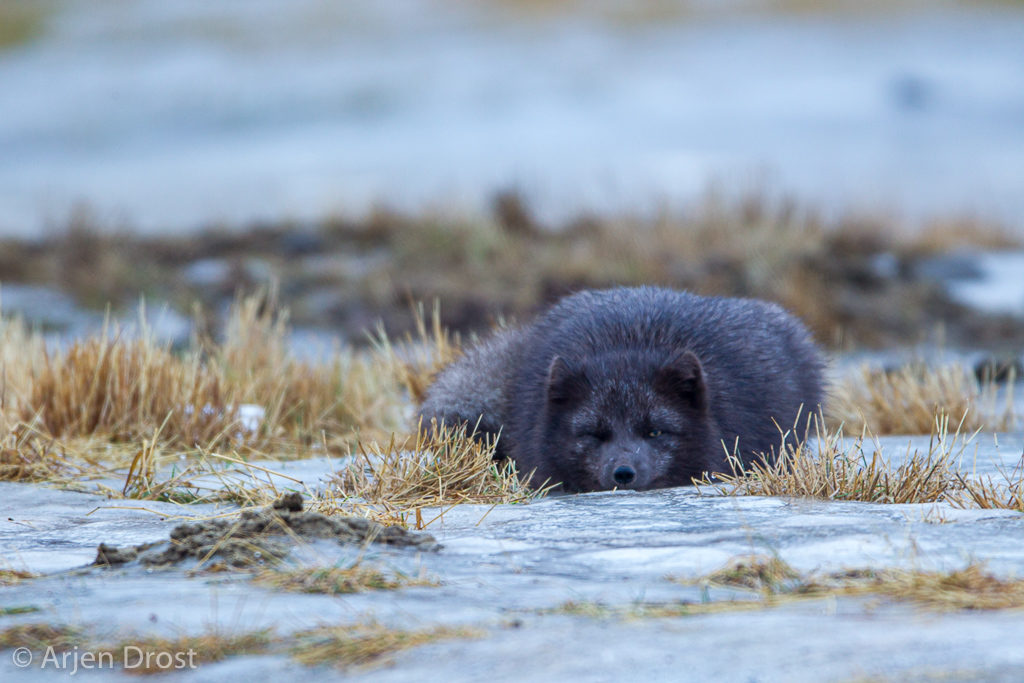 After a couple of days it was time to head south. As it had been above freezing for the whole time we were in Vestfjord, the roads were a lot easier to drive on the way down. We would stop at another cottage near the Icelandic highlights of Geyser and Gullfoss in the southern parts. So far the weather hadn’t been good, but at least it was dry. The day we spent at those two highlights this changed and the rain was pouring down the whole time. Not the best weather for good pictures. It was still great to stand around the Geysir that gave all geysers it’s name (even though it’s dormant now) and the waterfall of Gullfoss is impressive in any weather. 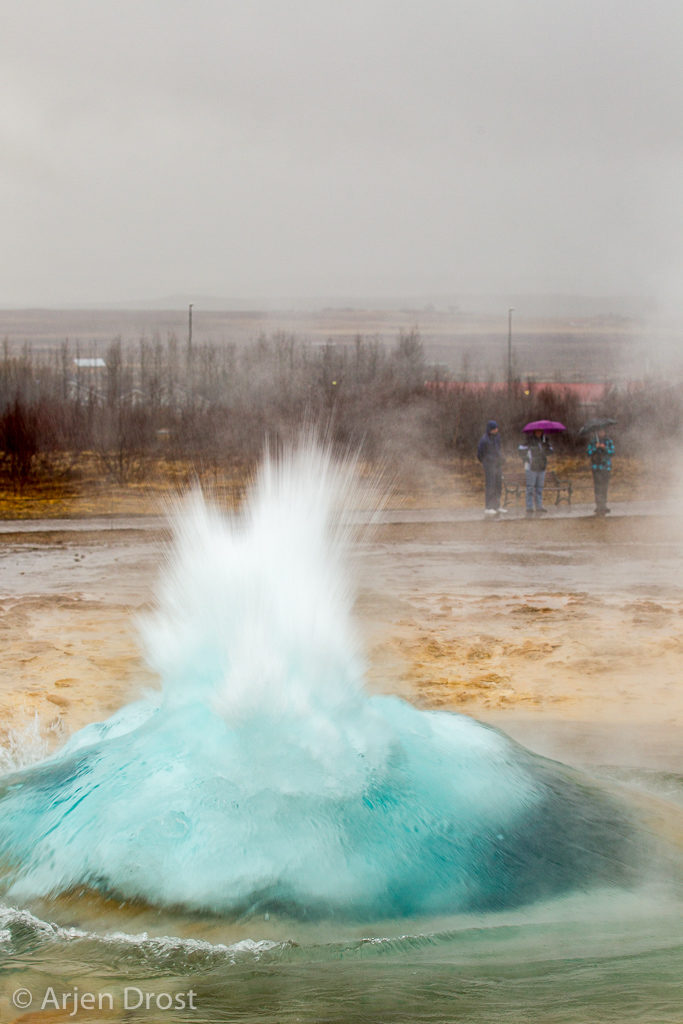 After this visit it was time to pack our stuff and head back to the airport and fly back home. We had a great holiday, made some nice pictures. Our goal however, finding the Northern Lights, would still stay for another time…