When the light disappears – Spitsbergen

It’s 6am on the day, March 20th. I wake up because one of my neighbours shouts to his friend, who is in a tent at the other side of mine that it’s -19C inside his tent (that probably means it’s -25C outside), but that the weather is beautiful. Clear blue skies and not a lot of wind. Great news of course, though they could have informed me an hour later. I try to sleep a little, not that easy in this cold. This night was really hard, when the temperature stays above -20C sleeping is not much of a problem if you have the right equipment. Below -20C it’s a different story however. But I made it, and the good news is, the weather is good. Something I didn’t expect a few days ago. The weather forecasts always said partially clouded, but I this often meant we didn’t see the sun at all. Today I want to see the sun, because it will disappear for a while. Today is the day of the total eclipse! For this day a few thousand people came to this remote archipelago. Some of them visit nearly every eclipse they can get to. Not me, I specifically came to Spitsbergen for this eclipse. It’s my 15th time here, but the previous 14 times were all in summer. First working as a scientist in Ny Ålesund and in recent years working as an expedition guide for Oceanwide Expeditions. But winter is something completely different. It’s white, cold, can be windy and the sun does set. At night it gets really dark and we even had some Aurora’s. 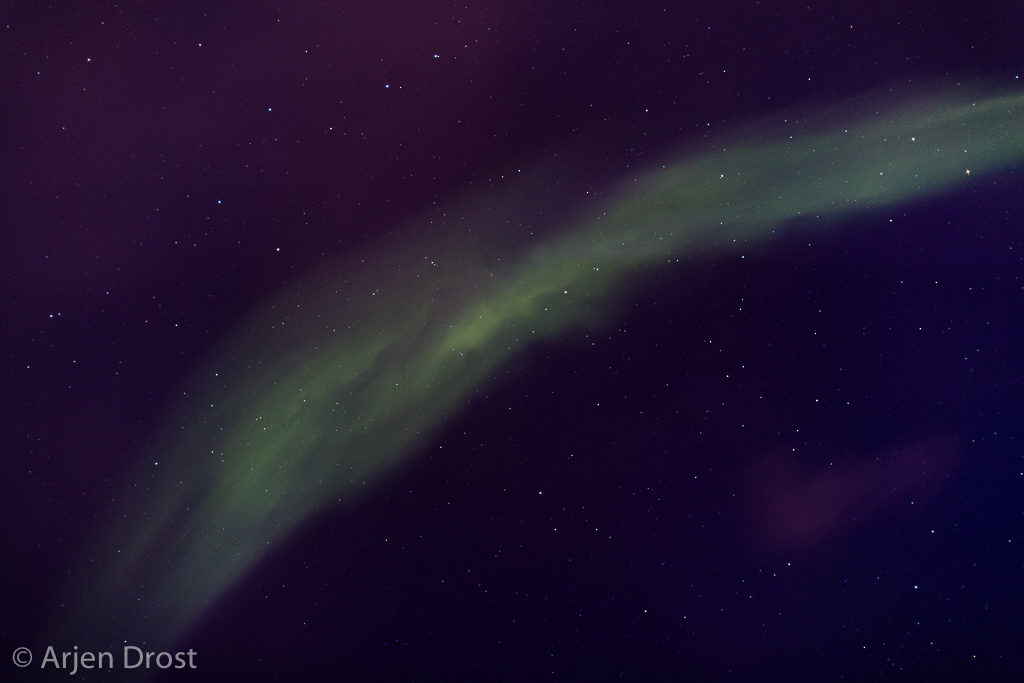 The past days I’ve spent looking for winter wildlife and for a good spot to see the eclipse. One of the places I had in mind was at the entrance of Bjørndalen, a small valley quite close to the campsite. A nice valley for a day trip, to check out the possibilities and to see what I could find on the way. Camera gear on the back, rifle over the shoulder, warm clothes, gloves, a thermos with hot tea and I was on the way. Halfway the entrance I suddenly saw something move on the frozen tundra. White things were moving on the snow… I quickly grabbed my camera and laid down on the frozen ground. Spitsbergen Ptarmigan in their white winter plumage, one of the goals for this trip. These birds are very difficult to spot in summer, with their brown camouflaged plumage they blend in perfectly with the tundra. In winter it isn’t any better, now they’ve changed their plumage to pure white, something that doesn’t really stand out in the snow either… But once you’ve found them, it’s not very difficult to take pictures as they can be really tame. This flock of around 10 birds gave me all opportunity to take nice pictures. 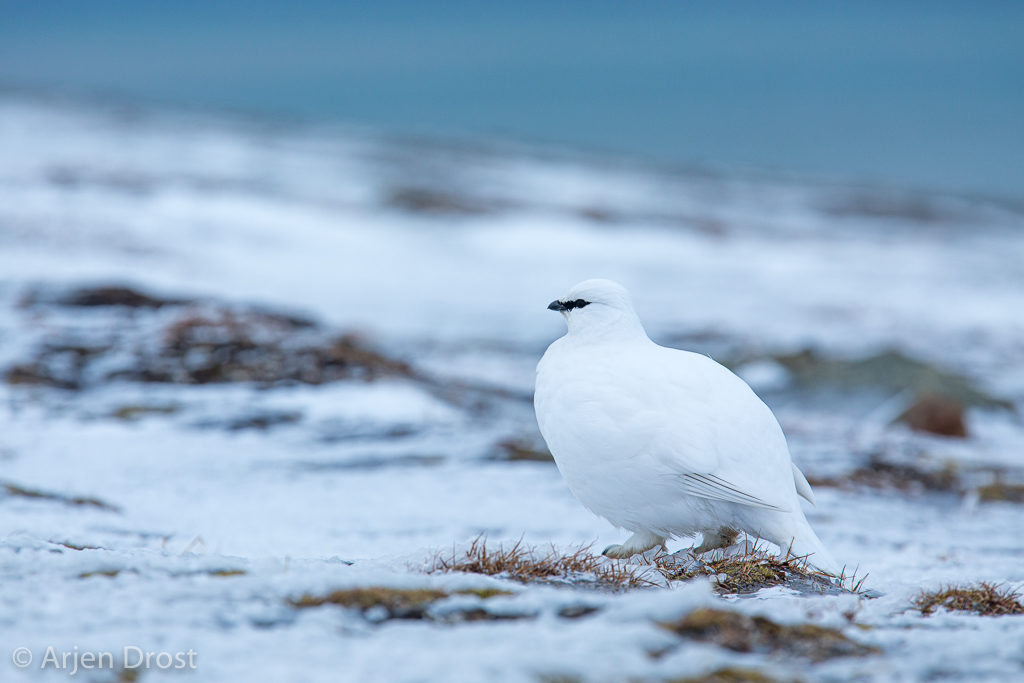 A little later I heard one of my other target species, the Arctic Fox. This animal has the same trick as the Ptarmigan, brown in summer, white in winter. This time the animals were high up on the mountain, out of reach for my lenses. The Spitsbergen Reindeer were preforming nicely however. For them winter is a really hard time, especially one like this year, where the ground is covered in a layer of ice. Due to some temperatures above freezing earlier in the season, some of the snow had melted and had refrozen on the ground, covering the little vegetation that was available for the Reindeer in ice. Even though Reindeer rely heavily on their fat reserves, they do need to get some food every now and then and in winters like this many can die from starvation. 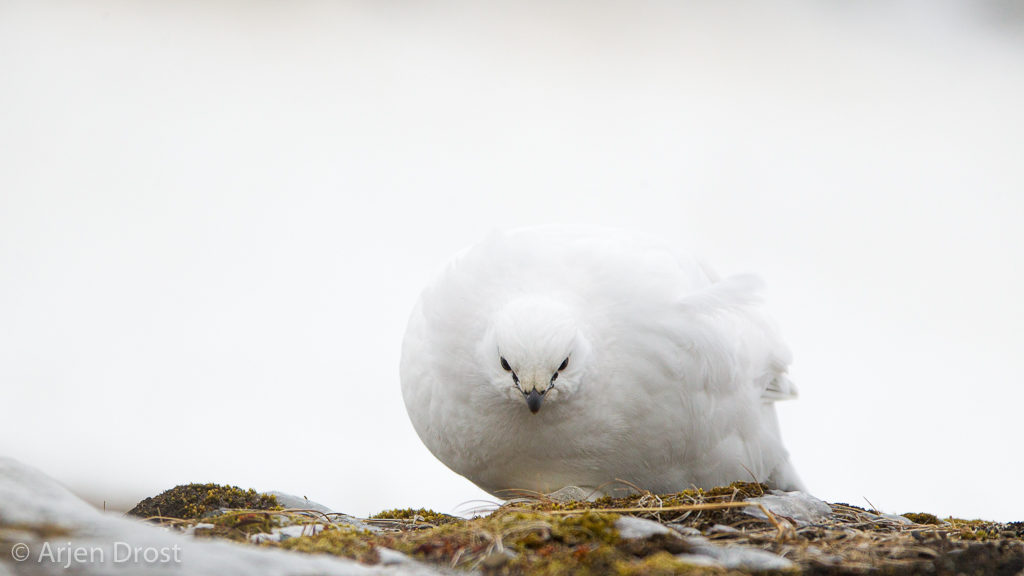 Meanwhile I reached the entrance of Bjørndalen. It looked nice indeed, but I had already discarded it as an option for the eclipse. There was only a very small part of the valley where the eclipse would be visible and the chances of clouds ruining the spectacle would be too big. On the way back I suddenly saw something swim in the water. “Ah, nice, a seal, probably a Bearded.” was my first thought. In summer those are the most common large seals in these waters and I had already seen one hauling out on the ice near the harbour. Something made my grab my camera, in winter there might be a chance of other seals as well… It was way too far away for a decent picture, but I should be able to get a proper ID on the animal. The first image showed a large brown back, something that would fit Bearded Seals. The second image however showed large white tusks, something that Bearded Seals definitely don’t have. I was looking at a real Walrus!! Not common at all in the waters around Longyearbyen. 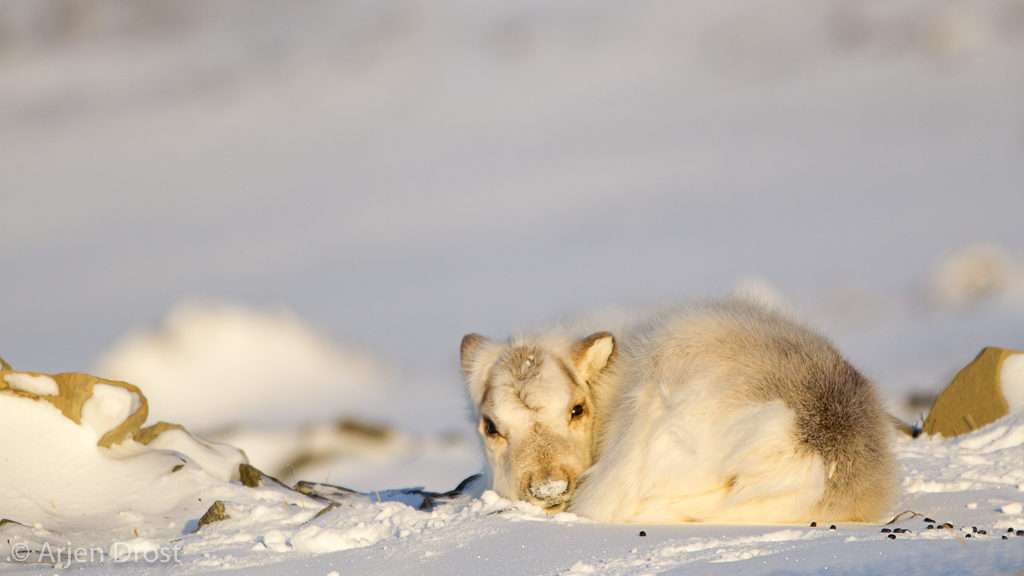 This morning it’s very busy at the campground. As most accommodation was already booked years ago, the campsite is the only option to spent the night and see the eclipse. Some people decide to stay near the campsite, but most people decide to go to Adventdalen. I grab a taxi and are dropped off halfway this large valley. Everywhere large tents are erected and groups of people are waiting for the moment… I decided not to join one of those groups and find my own place, together with Eva, a doctor who joined one of the trips the past summer. We’re nicely on time, we’ve got time to set our camera’s, fix our filters and make sure all batteries work and the memory cards are empty. Then, suddenly, a small bit is out of the sun. The first images are made and over the next hour more and more of the sun disappears behind the moon. Still only very few clouds near the horizon, so those won’t interfere with the eclipse. Excitement is building as it slowly gets a little bit darker. Then, from one moment to the other, the sun is gone. Hidden behind the moon. Only the outer layer, the corona is visible. And even a few prominences, explosions at the edge of the sun. Details like this are normally not visible as the sun itself is far too bright. But with the bright part covered these beautiful details become visible. In the sky Jupiter and Venus are visible, but not the Aurora’s, something many of us hoped for. After a way too short 2.5 minutes a small part of the sun reappears and the magic is gone. Some people already pack up, we stay until the last moment, taking pictures of the partially covered sun. We’ve gotten quite cold, but the adrenaline gets us going. What an awesome and very special moment. 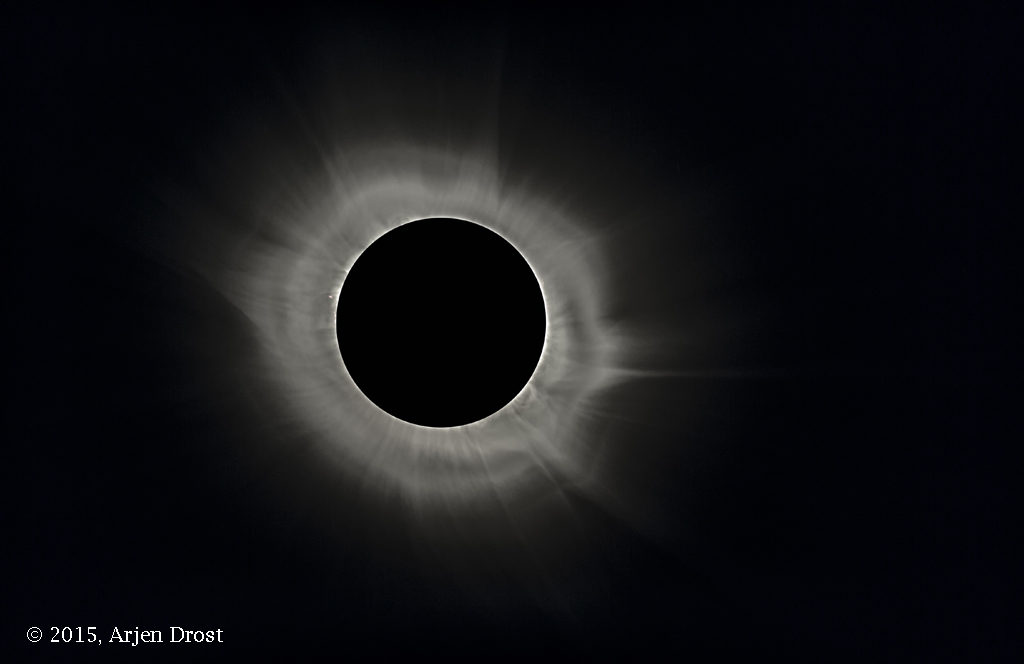 A compilation of the solar eclipse

The rest of the day is spent looking at images and talking with people about the eclipse. Now I finally do understand the people traveling all around the globe to see eclipses. I don’t know when or where, but I will see another total solar eclipse. That night it’s only -15C, almost warm, given the temperature the previous night. Just when I’m about to enter my tent, we get another treat from the sun. A special show of Aurora borealis lights up the night sky. A great way to end very special day! 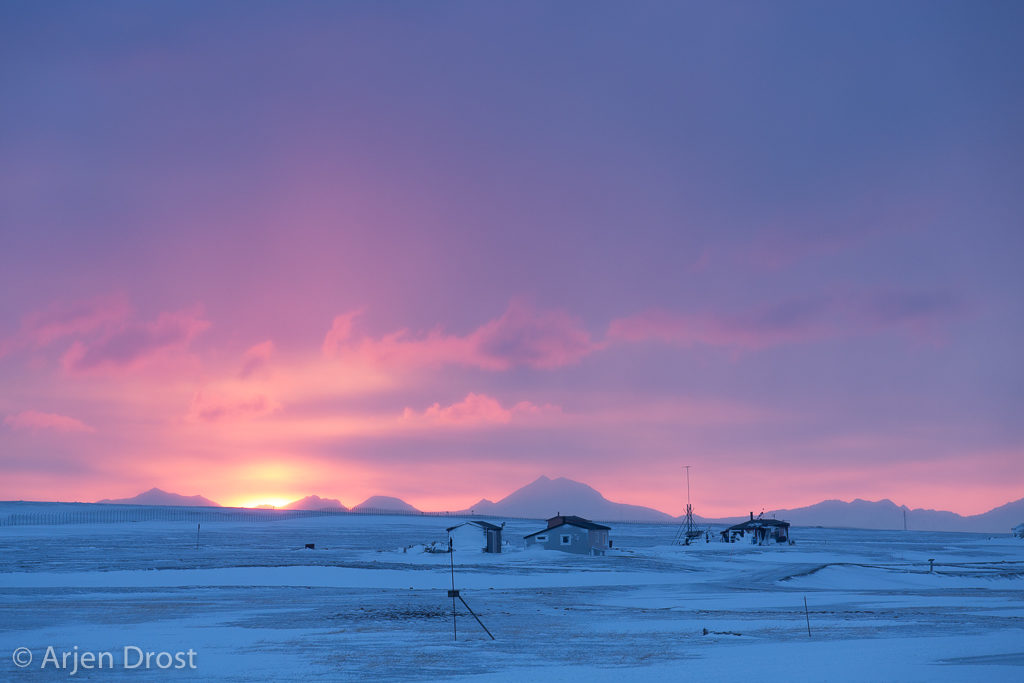 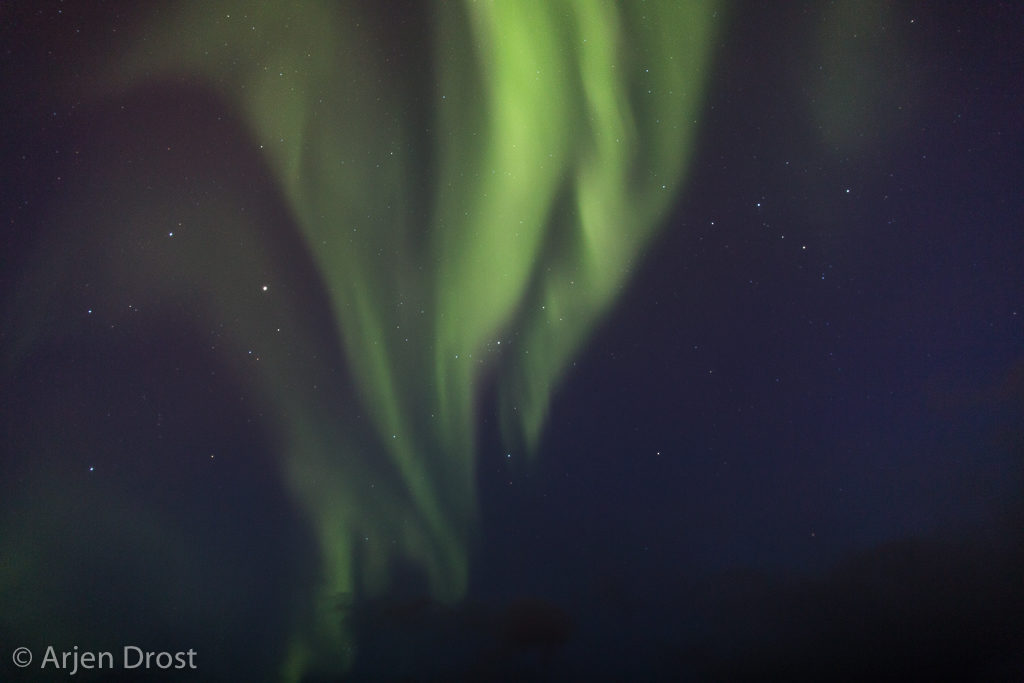