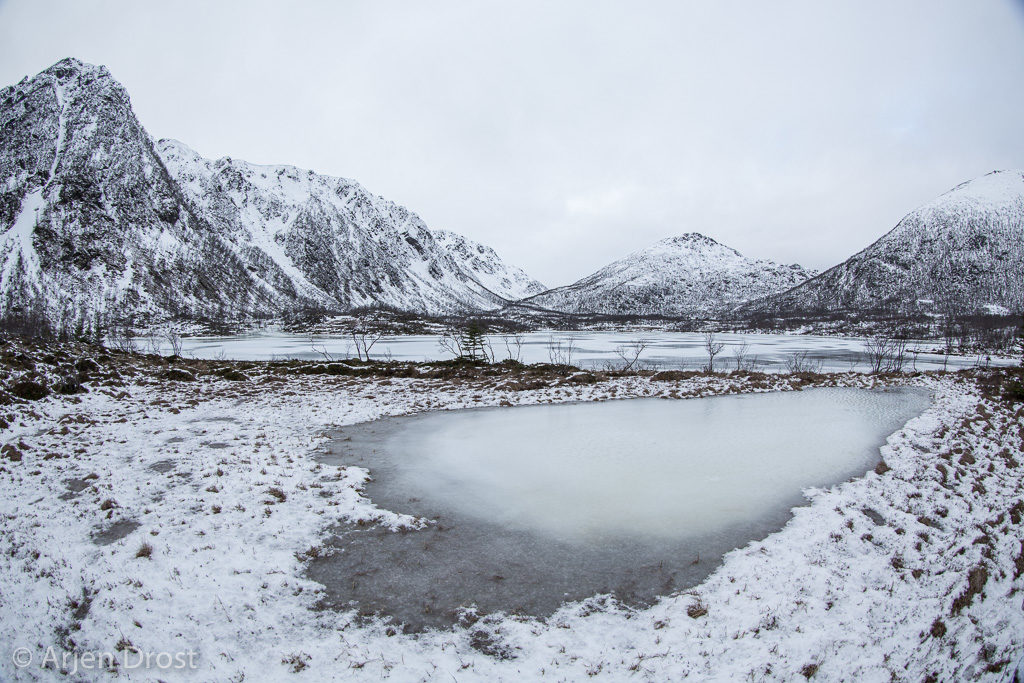 After our unsuccessful attempt to find and photograph the Aurora in Iceland in 2013, we decided to give it another try in Vesterålen, Norway in 2014. A different location, hopefully different weather and hopefully better luck?

The start wasn’t very hopeful. We hoped for another winter holiday, with nice snow landscapes, but in the weeks before we departed, there wasn’t any snow. To our surprise, we did land in a white world. That night it finally started to snow. So far so good. A new problem was that our luggage hadn’t arrived with us. But SAS promised us to bring our luggage the following day and we got a nice survival bag (containing a t-shirt, washing powder, a toothbrush etc.). This time we had a nice cabin near Sortland, Vesterålen, next to the fjord. The next day we just made a little tour near our cabin, as we didn’t dare to move too far as our luggage should arrive. Not that this was such a pain as those surroundings were really nice. The fresh snow gave a nice and clean look to the mountains. It took until the evening before our luggage arrived, but it was good to have our own things back. That evening it was overcast again, not good for the Aurora. 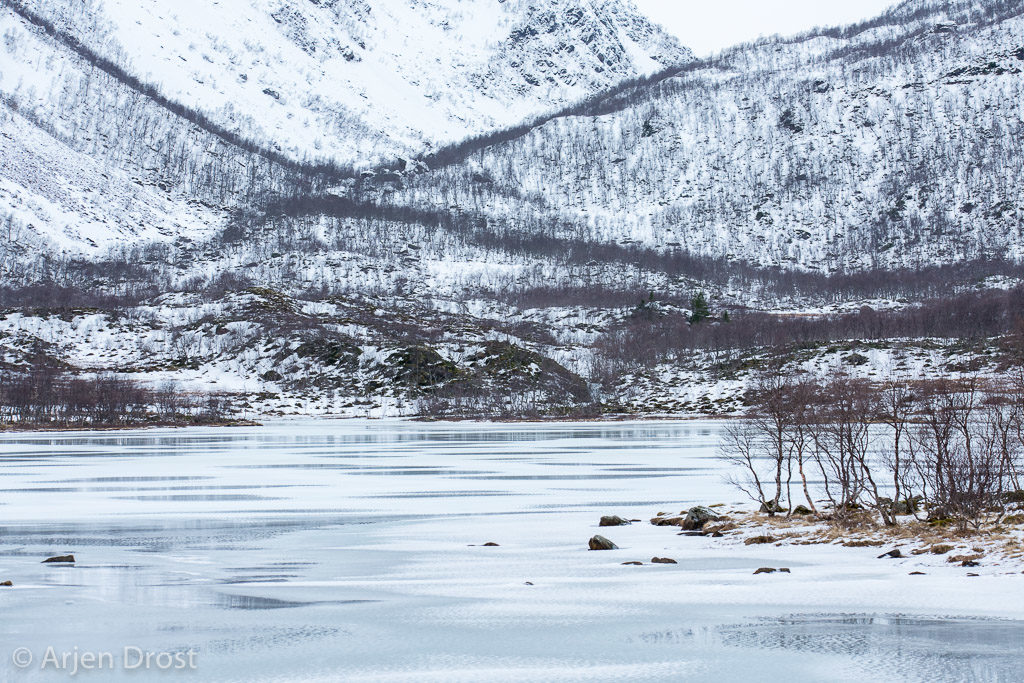 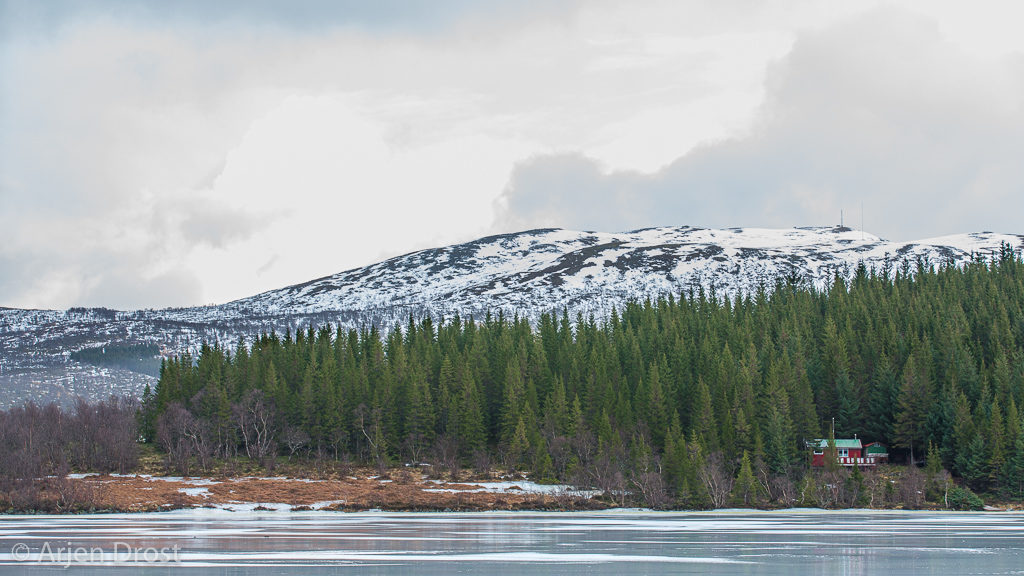 The following days we cruised around Vesterålen. Had a look at all sides and really enjoyed the scenery. One trip we really liked was to Nyksund. This is an old abandoned fishing settlement surrounded by nice mountains. We went here twice as the first time we couldn’t really take the images we wanted due to the rain. The second time we made several stops to take pictures of the mountains, but also of the fish that was hanging to dry along the road. On one of those stops, we found a dead otter along the road. A pity that my first otter ever was a dead one… In Nyksund we took some more pictures of the abandoned buildings and we had a White-tailed Eagle flying over our heads. We had seen several already, but taking a good picture turned out to be quite difficult. This time I had just put my wide-angle lens on the camera and my bag with the tele was too far away… This disappointment was forgotten when I heard a soft whistle along the shoreline. I had no clue what bird could make a whistle like this, so I had a look if I could find the source. It turned out that I was right, it wasn’t a bird, but a family of Otters who was playing along with the stones on the shore. It was already getting darker, so I didn’t have enough light to take proper pictures, but it was really nice to see my first live Otters. 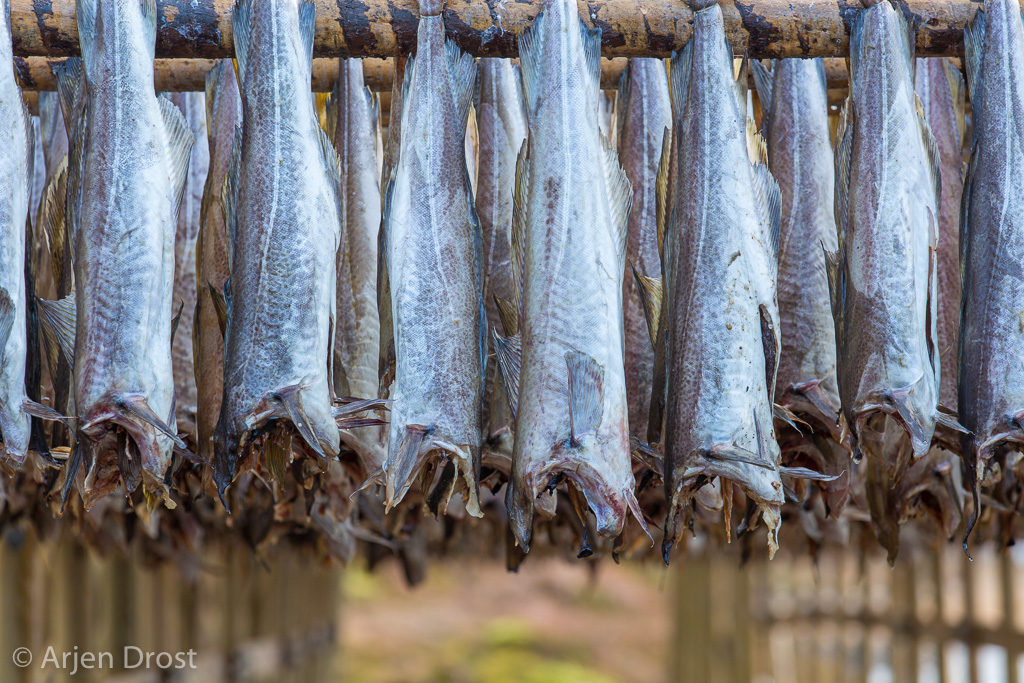 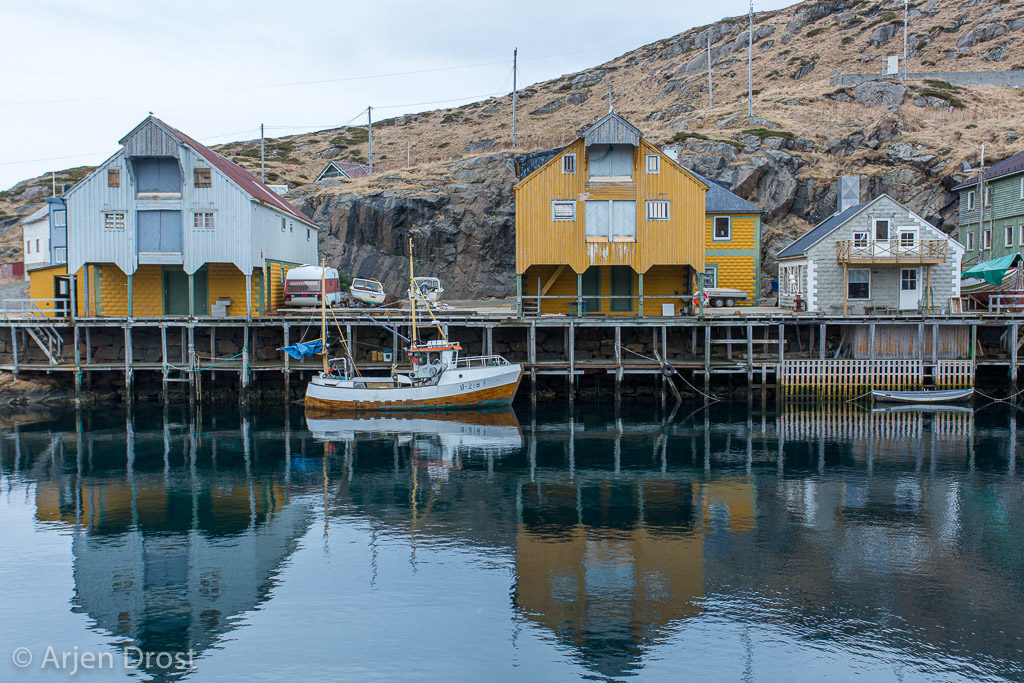 In the evenings we always kept an eye out for the weather. Often it was overcast, so there was little chance of seeing the Aurora borealis. One evening the sky cleared, however, but a look at different aurora borealis sites (like this one) learned that there was only little chance of seeing any northern lights.  Each time we had to get up that evening, we still had a look outside, one never knows. Indeed, there were enough stars to be seen, but the sky didn’t turn green. Until, later in the evening, I saw some strange cloud in the sky. When I took out my camera and made a picture with a long exposure, I could even see the cloud was green! Our first Aurora’s!! I quickly called my mom and Geert so they could also have a look. On camera, we could see a little bit green, but it was too weak for our naked eyes. Too bad, but at least we had seen something, already an improvement from our last holiday… 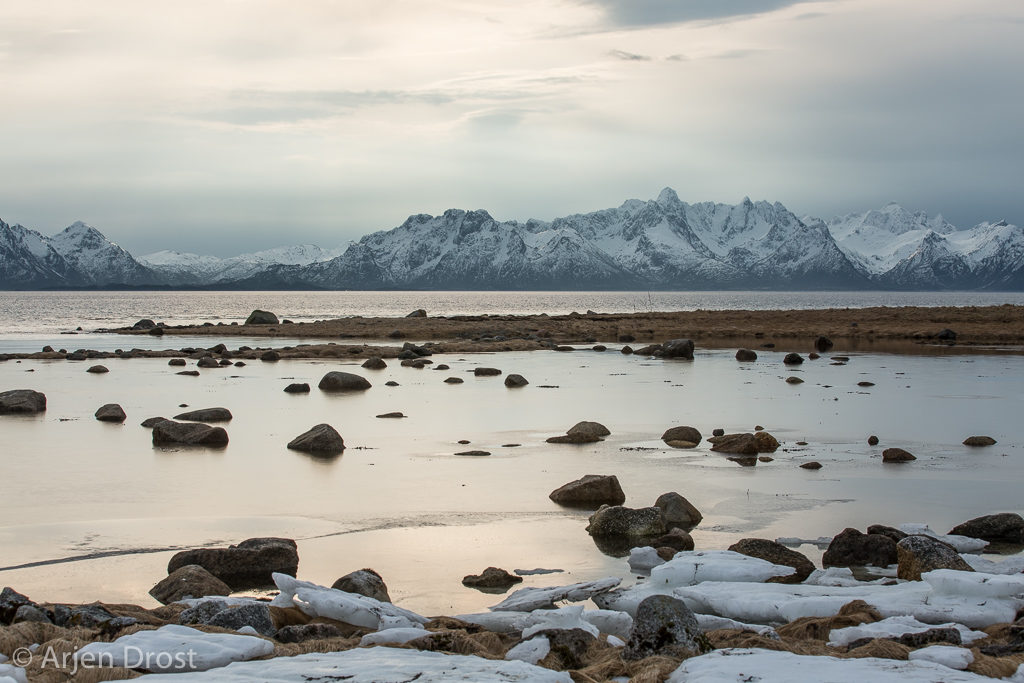 Another day we went to Andenes in the north of the Vesterålen. Here we had an appointment with Sea Safari Andenes to join a boat on a whale safari. We were just too late for the large numbers of Humpback and Killer Whales, but there were still Sperm Whales around, a species that I had only seen once before. When we parked our car, I already found several King Eiders in the flocks of Common Eider in the harbour. This looked good! Soon we had our warm and waterproof suit on and we boarded the RIB. This is a sort of large zodiac with seats that can go really fast and can be really bumpy. There were quite some waves, resulting in few people to get sea sick. The crew had seen a spout from the shore, so we had a direction to go to. But well, whales tend to be below the water a lot longer as they are above the water and the waves didn’t make it easier to find any… We circled around for quite some time, getting cold, despite our warm suits. Then we finally saw a fluke and now the speed of the RIB was useful. Quickly we headed into the direction of the spout and now we could have good looks at the whale surfacing and diving under while showing its fluke. When this individual had disappeared, we got a call of another ship, they also found a whale. Here we had another nice encounter with a whale. The ship that had found it was from another company, one I had also considered. When I saw this ship, an old small fishing vessel, I was happy we had chosen our company, as this boat was bouncing up and down like a bath duck in a storm. That would have made it a lot more difficult to take nice pictures. And our RIB gave us a nice low point of view. Now it was time to get back to land. For some people relief, I could have easily stayed out a lot longer! 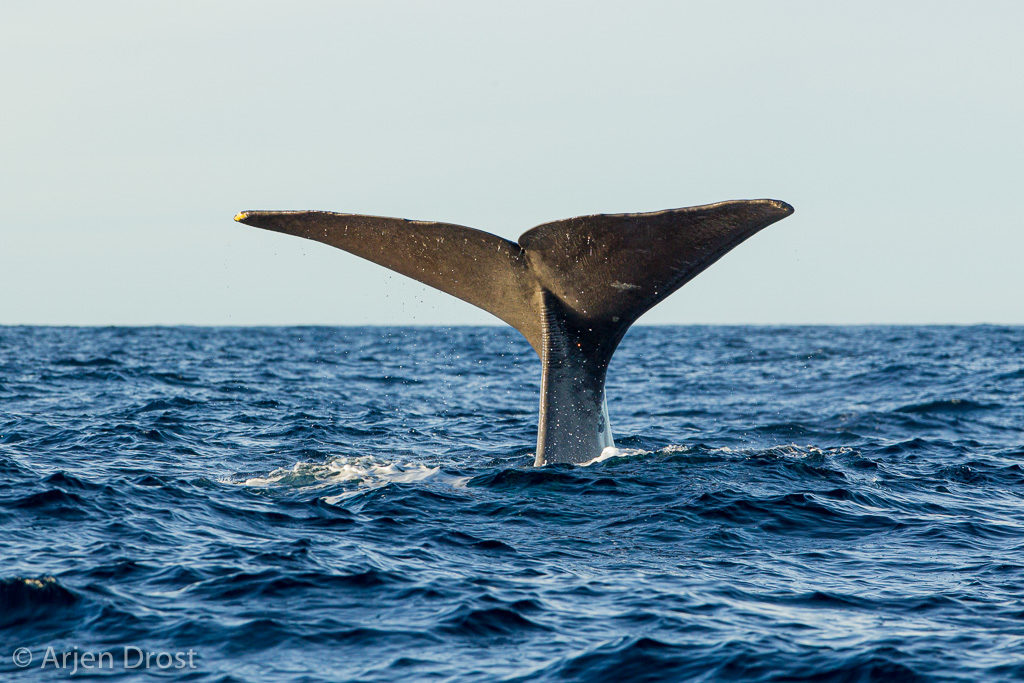 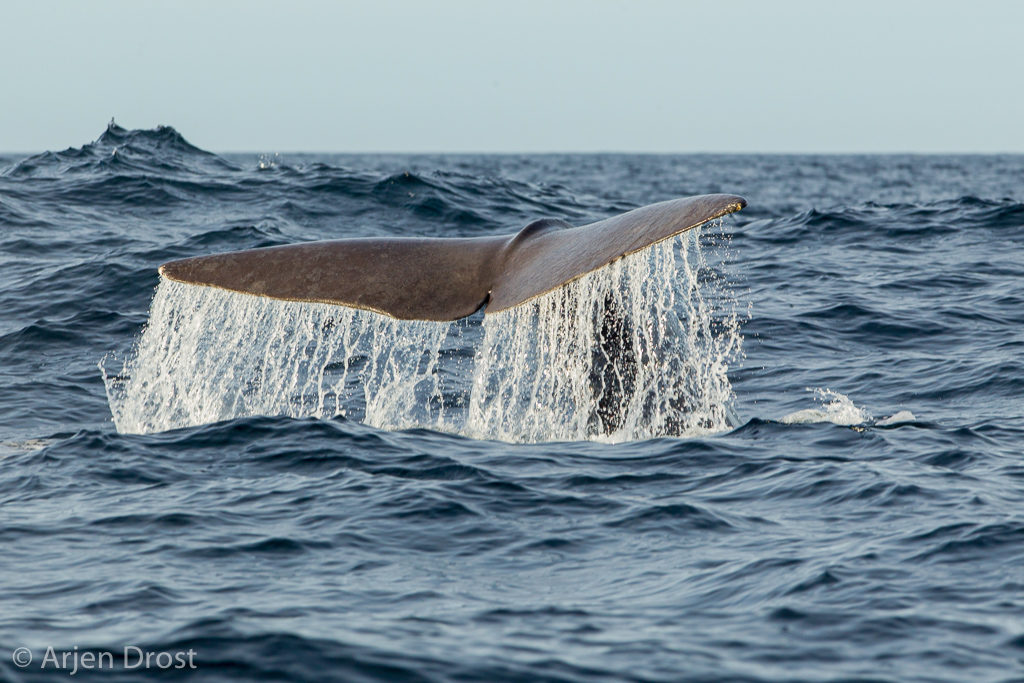 At home, the Aurora forecast was really good! A major solar storm was heading our way, and there were hardly any clouds. This meant we spent a lot of time looking out of our window or even outside, but it turned out it’s really difficult to properly predict northern lights as nothing was seen that night. This was a pity as the next night would already be our last one. And as we had to leave for the airport early the following morning, we planned to pack early and head to bed early as well.

But nature decided differently… We had already packed our bags and were editing our pictures a little, but we still had a look outside every now and then. We didn’t expect much, the forecasts were ok, but there were too many clouds. During the past hours, the Aurora prediction had steadily increased, but that didn’t do us much good if it was all overcast… But suddenly I could see some stars. And.. Really? Do I see…? Maybe I should get my camera out again… And indeed, on our last night, we were treated on one of the nicest Auroral displays I have seen. There were just enough gaps in the clouds that we could really enjoy. With our cameras, but this time also with our naked eyes. Red, green, it was everywhere above us. When we got inside, we already had several messages from friends in the Netherlands that it was also visible over there. But we had first row seats. Really nice displays! They lasted quite some time, coming and going, just as the clouds. Around midnight they faded away, which was just as good, as we now only had 6 hours to sleep before we had to go to the airport. 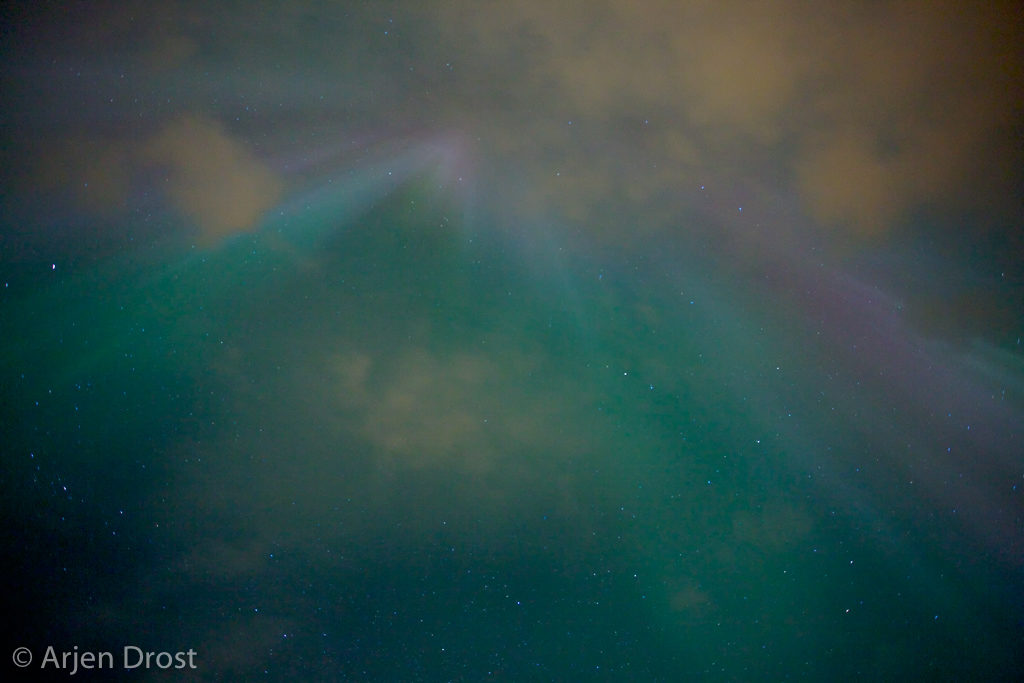 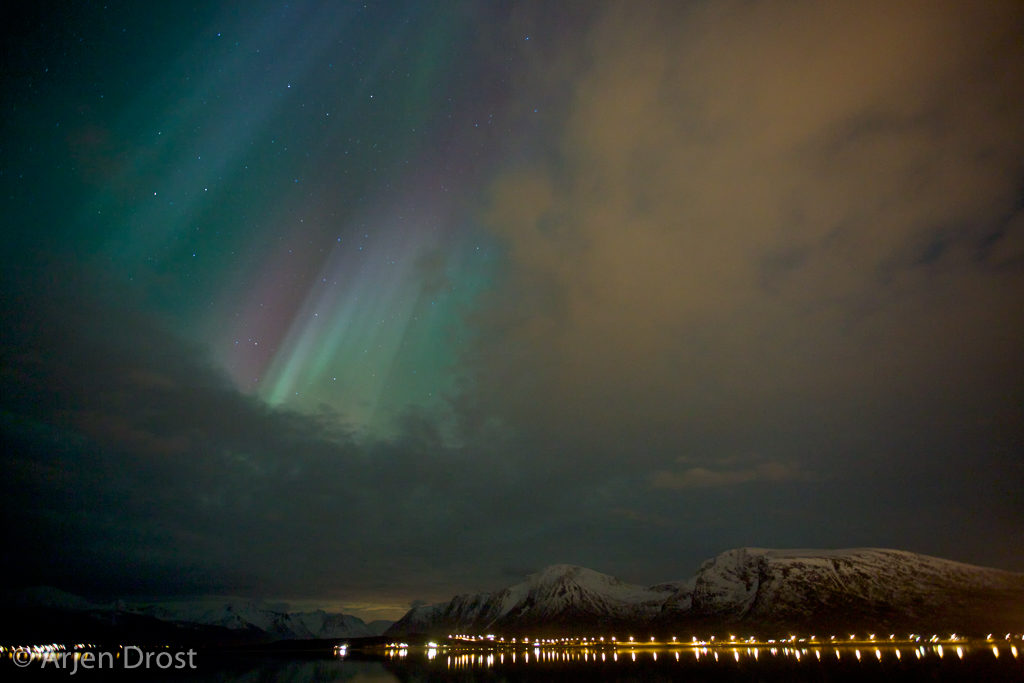 Needless to say, we were really tired, but above all really happy on our way to the airport. It took us two trips and two weeks, but we finally managed to get a really nice Aurora borealis show! Now, this taste like more… I’m sure there will be a ‘Chasing the light’-trip part III. To a different place, but at last we had found one of the most spectacular natural shows on Earth.