He, who rules them all – Emperor Penguins of Snow Hill Island

During my work for Oceanwide Expeditions, I get to do trips and visit places that are high on many bucket lists. I feel very fortunate to be able to make trips like this on a regular basis. Some trips, however, are even high on my wishlist. One of them is the trip to the Weddell Sea. This sea is on the other, rarely visited side of the Antarctic Peninsula where most trips go. The scenery here is entirely different, much more sea ice, more colossal icebergs and, above all, the most accessible Emperor Penguin colony in the world. Now ‘the most accessible’ is relative, least inaccessible would be a better way to phrase it. All other colonies are far south, deep in the pack ice, far away from any real harbour and completely inaccessible. So the least accessible only means that sometimes there is a chance to get there. 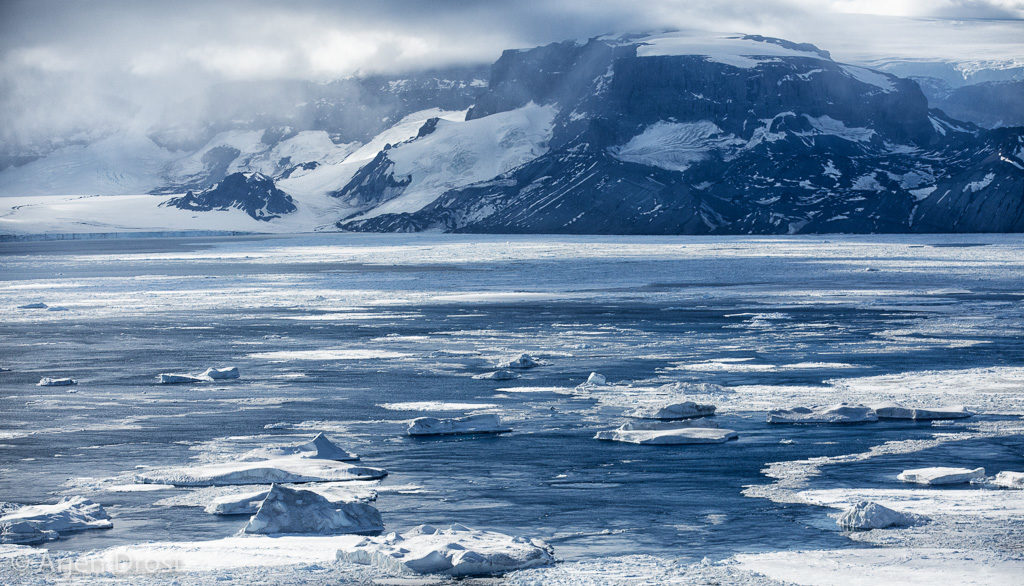 Icebergs and sea ice in the Admiralty Sound in the Weddell Sea, Antarctica.

Emperor Penguins are known by the public because of movies like Happy Feet and March of the Penguins and have a bizarre breeding cycle. They mate in March, at the onset of the Antarctic winter, the coldest winter on Earth. During winter, with temperatures plummeting to -40ºC/F or below, the males incubate the single egg on their feet in a colony on the sea ice. After two months, the egg hatches and the males have just enough left to produce a milk-like substance as a first meal for the chick. Then, hopefully, the females return with ‘fresh’ food. In the beginning, male and female take turns going to see to get food. Later, when the chick is large enough to stay warm by itself, both parents go out to sea to get more food. As the sea ice starts to break up during the start of summer, the distance the parents have to cover between the colony and open water gets shorter and shorter. This way, they can provide enough food for the growing chick. By mid-November, there is only a bit of sea ice left. This gives us the possibility to get close enough to make a landing possible. 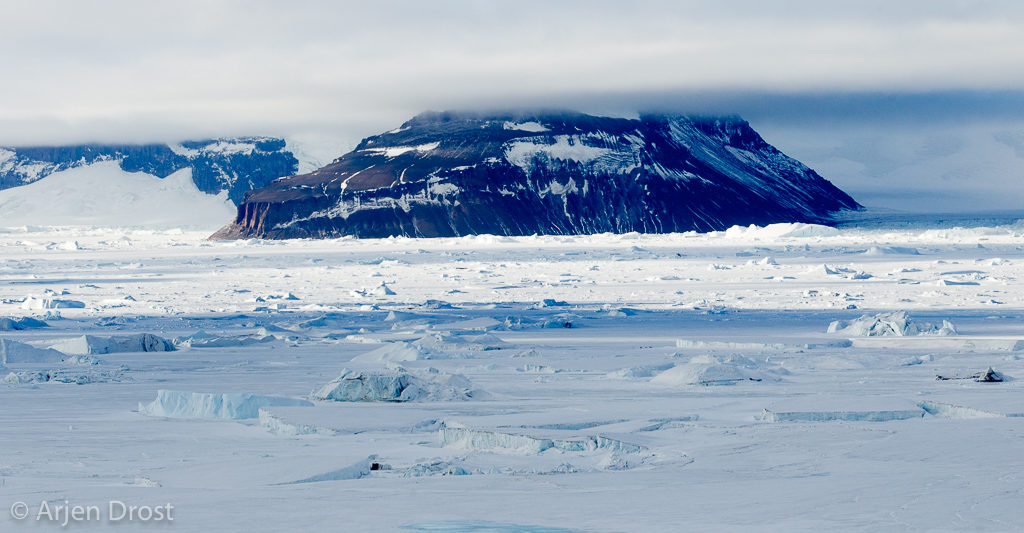 The last ship to reach this colony was the Ortelius, in 2013. In the years since we’ve tried each year, but never managed to reach the colony. I was part of the last two expeditions on Ortelius, but both years there was too little ice to land helicopters near the colony. Instead, we started looking for single Emperor Penguins or small groups and explore the northwestern part of the Weddell Sea by zodiac and helicopter. Still, an excellent trip, as it gave a better view of what Antarctica really looks like, but there was always the hope for something more. 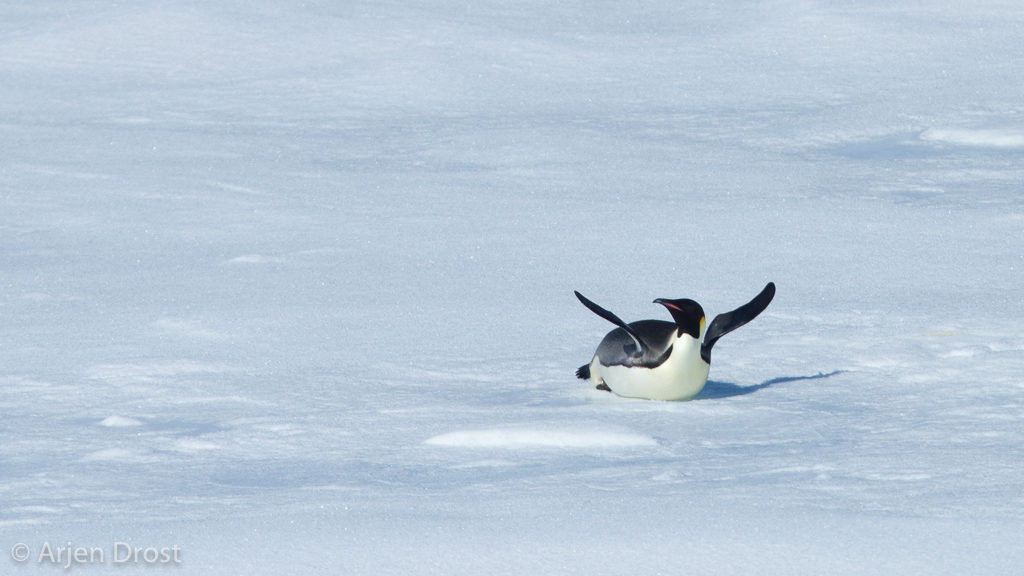 November 2017 we tried again. We had checked the ice charts for the last weeks. There was still quite a bit of ice in the area we wanted to go to, but it looked like it started to break up a little. And the captain was willing to take us into the Admiralty Sound, between James Clark Ross Island and Seymore and Snow Hill Island on the other side. That was promising, as it brought us within helicopter range of the colony. On our way here, we already found our first Emperor Penguin on an ice floe. It was kind enough to pose for us, while we were getting closer. A promising start of the trip. By the end of the third day of the trip, we had just finished the helicopter practice run with our guests; we were stopped by a thick belt of ice. But we were close enough to take off and have a reconnaissance flight towards the colony. As the colony moves around a little each year and we had to assess the ice conditions, this flight is always necessary. For the first time this year, I was part of this reconnaissance. So exciting! I finally got to see the colony, if only from the air! After a 20 minute flight, we arrived at the place where we expected the colony to be. A little searching, and there they were! It turned out to be four smaller groups of Emperor Penguins huddled together. An impressive sight, even at a distance. And, even more promising, the ice conditions looked excellent. Solid ice all around the colony. A few massive icebergs nearby where we could land behind to avoid disturbing the colony. This seemed very promising for the rest of the trip! 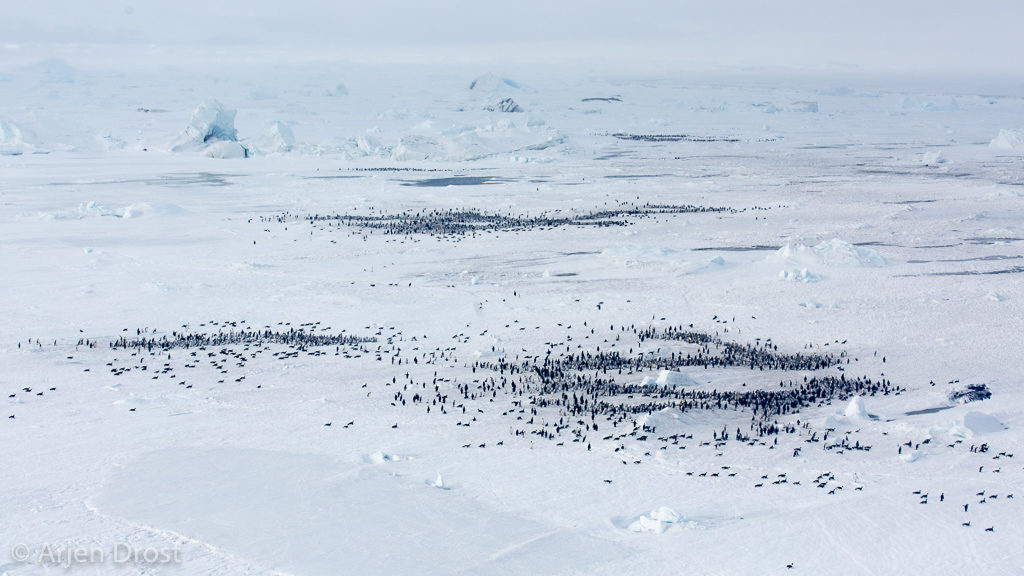 The next day, the wind picked up to over 40 knots, far too high to fly helicopters. And standing on the ice at -10ºC in those winds isn’t very appealing either. The good thing was that this wind was dispersing the band of ice ahead of us, and the captain took the time at hand to bring the ship even closer to the colony. When we hit the solid ice, we estimated the flight time was only five minutes. And the forecast for the next day was promising!

And indeed, it all came together! The next morning we woke up early. Bringing over 100 people ashore and back to the ship with helicopters takes a long time. Small groups left the ship, went to the colony, spent an hour there and returned. I was in charge of getting the people from the ship in the helicopters, so after a while, I saw many happy faces return. With the last flight out, it was my turn. I don’t think I ever felt this excited. We had managed, as the first ship in 4 years, to get all passengers on the ice next to an Emperor Penguin colony!! After a quick celebration with some of my colleagues at the landing site, I made the short walk to the colony. What a sight! Hundreds of Emperor Penguins were waiting for me! Of course, we had to stay at a non-disturbance distance of 30 meters, but that didn’t change the feeling. And, more importantly, the penguins didn’t seem to know this rule. Regularly one came our way, to see what those strange penguins were who suddenly turned up near their place. As we had planned a second landing near the colony for the guests in the afternoon, some of the guides could stay at the colony over lunch. This gave us even a better chance to see these seldom visited and beautiful creatures. 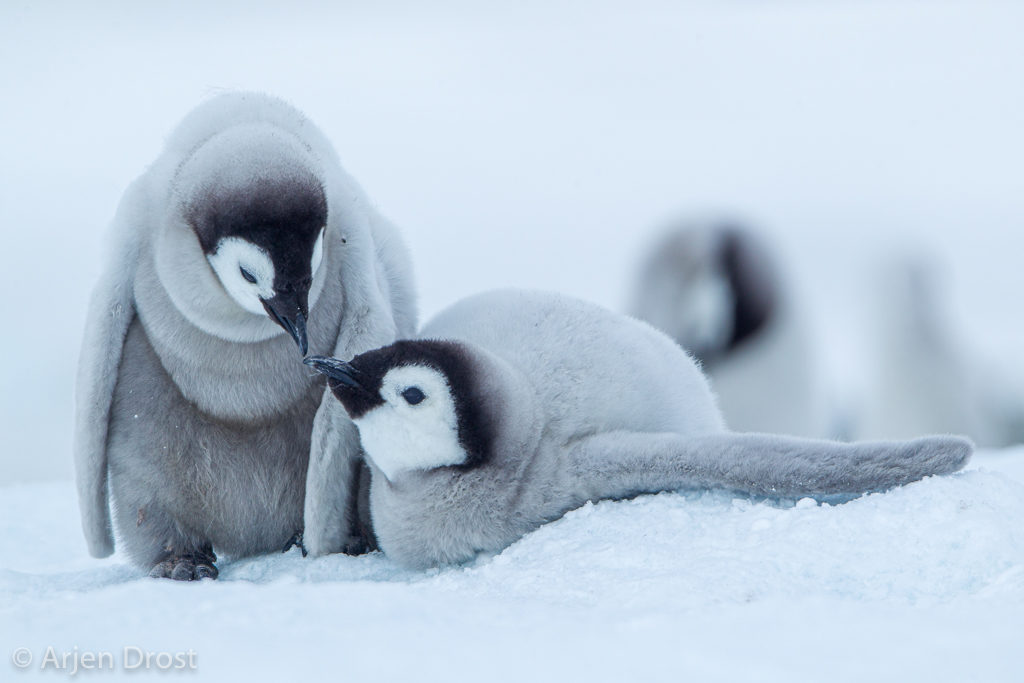 Two Emperor Penguin chicks together at the colony at Snow Hill Island.

The majority of the birds at the colony were chicks, not surprisingly, as most of the parents should be out feeding at sea. The whole day there was a constant stream of adult Emperors tobogganing from and to the colony. It amazed everybody how these adults managed to find their chick back. Although sometimes strange chicks tried to fool an adult, the adults didn’t let that happen. During the afternoon we managed to land everybody who wanted again at the colony so that everybody could have another hour at the colony. 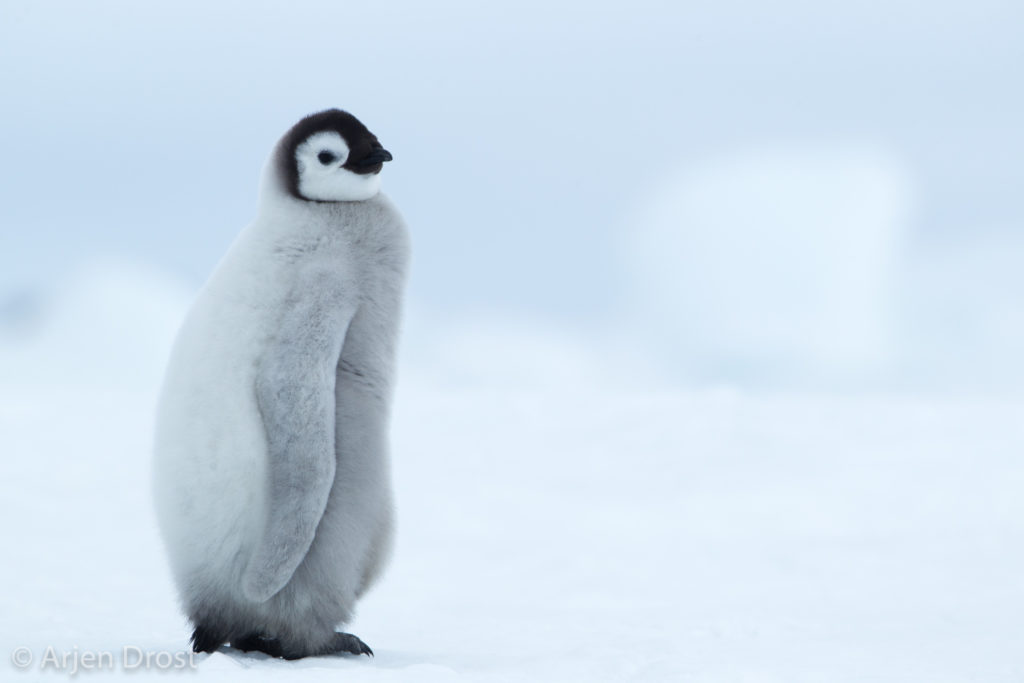 A young Emperor Penguin stands on the sea ice

Needless to say, the mood in the bar that night was excellent. For me, this was definitely one of the best days of my life. After trying for three years to reach this colony, I finally managed to spend time with this Penguin of Penguins.