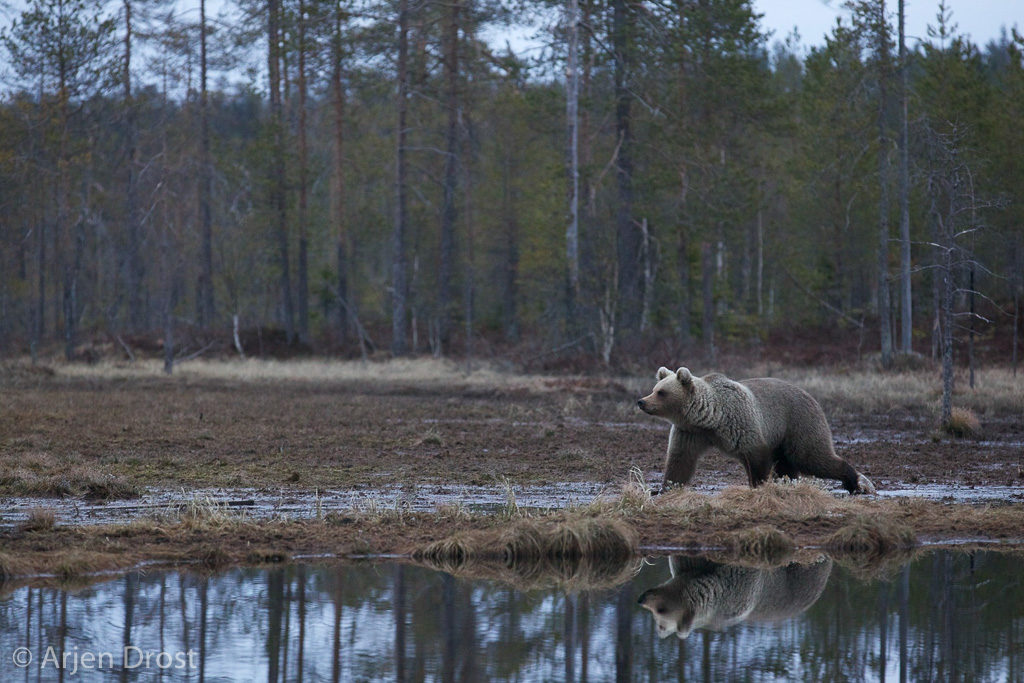 Brown Bear walking along the shore

After having spent several summer holidays in the Swedish taiga and fjalls, always looking for signs of any of the larger predators I hadn’t found more like a few Brown Bear prints and once a print of a Lynx. The real thing was way too shy to find. The only real option to see any of these animals is to spent time on a hide with some bait in front of it. In Finland along the border with Russia, several organisations operate hides like that. So the first problem is, which one to pick? Several factors help you make a choice. The first one is what animals do you like to see? At all places the chance of seeing Brown Bears is high, but at some places, you’ve got a higher chance on seeing Wolf, while on others the opportunity of seeing Wolverine is a bit higher. For those last two animals goes that it’s not guaranteed to see one (no guarantees are given for Brown Bear either of course, but those chances are high). For me, Wolverine has always been a mystical animal, so that was a big wish. The other important factor is the surroundings. At some places, the landscape looks natural, while at other sites the hides are positioned close to something resembling a lawn. After some searching on the internet and emailing a few people, I decided to go to Wild Brown Bear. 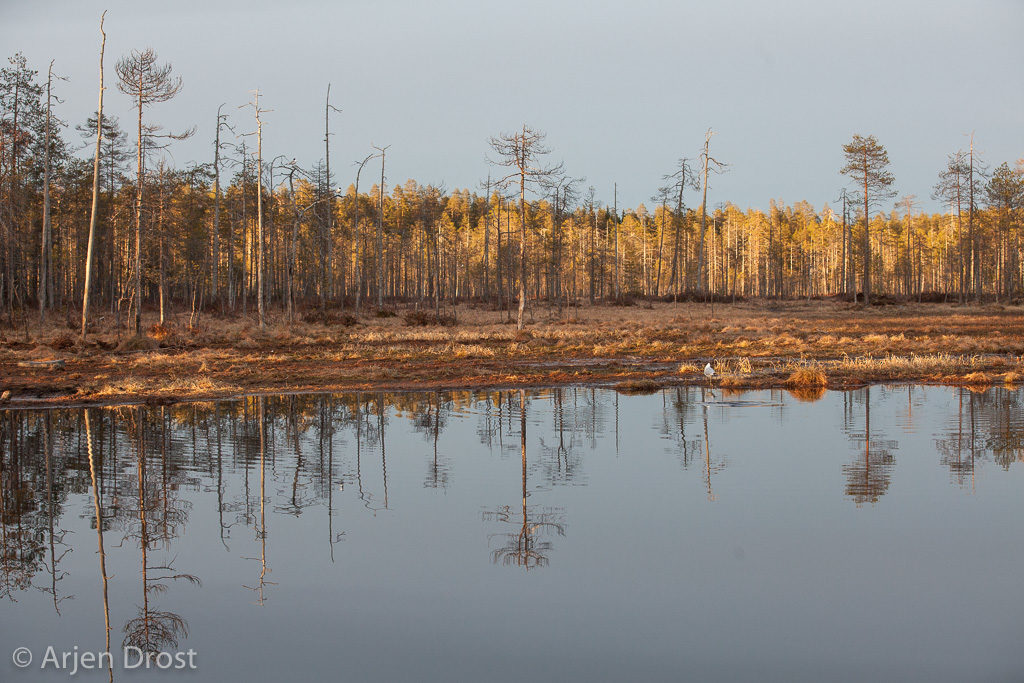 The lake with the bog and forest behind. The view six different hides had. 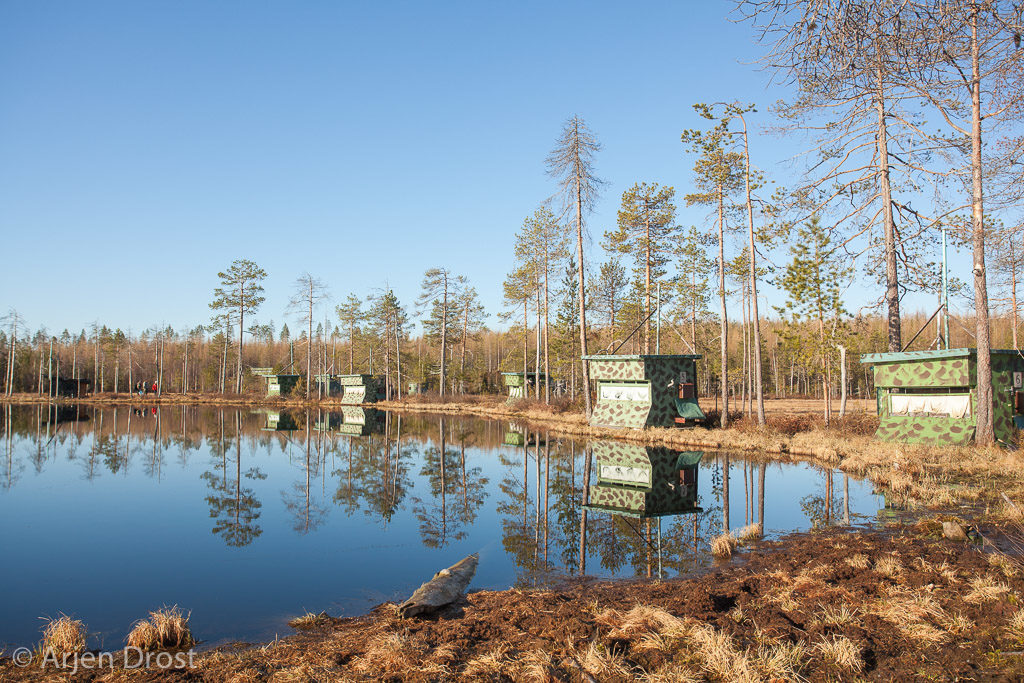 The hides facing the lake

I was picked up at Kajaani airport by Ari Sääski, the owner of Wild Brown Bear and brought to the lodge. As I arrived a bit too late in the evening, I had the first night off. I spent the first evening looking at pictures and deciding which hide I wanted to go in first. There are 14 hides, all with a different setting, so you can decide what setting you to hope your animals will appear in. Most activity takes place in the evening, and early morning, so I had the days off. On daytime, there are several things you can do. Walk around, make an excursion, eg. to Red-throated Divers, photograph passerines in a bird hide next to the lodge or even sit in the bear hides. Sometimes the bears or Wolverines also show up on daytime and otherwise, you can enjoy yourself with the birds that are present like these Raven. 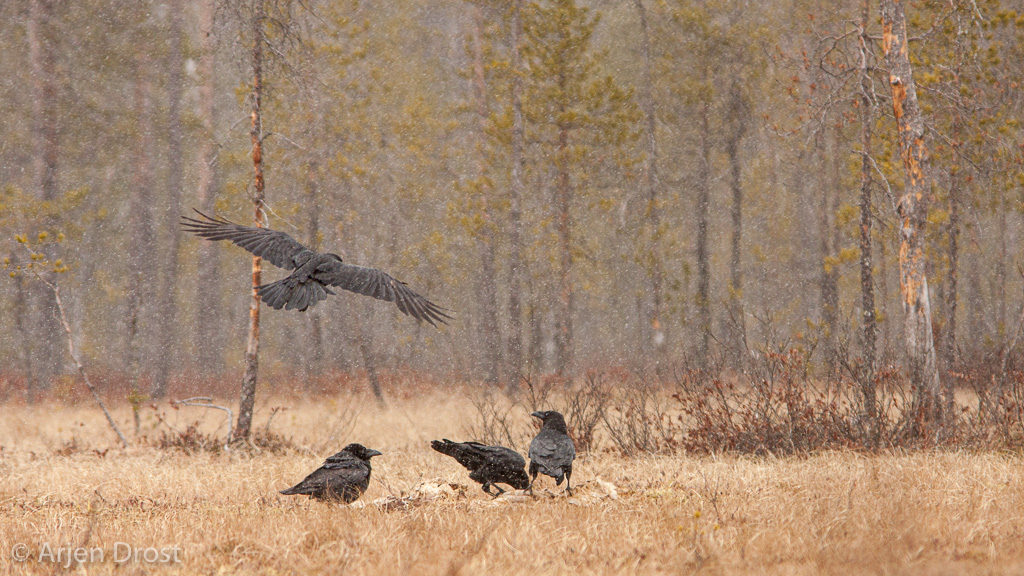 My first night in a bear hide was already very spectacular. I was brought to the hide around 5 pm and prepared for a long night, as I was only being picked up around 7 am the next morning. In the meantime, you’re not allowed to make any noise or leave the hide. They gave me a bag with some tea and sandwiches to survive the night. So after I settled, the long wait began… Will there be anything the first night already? How far will they be away? How will I survive the long wait? Well, I only had to wait one hour before I saw my first bear! It was on the other side of the lake, so I should have picked another hide, but it was a bear! A big adrenaline rush, of course, and quickly some pictures. After a few minutes, the bear was gone again. I was still looking at the pictures I had taken when the next bear showed up already. Closer this time… This continued throughout the evening, at one time I could see four different bears in different places! Some further away, others at only five meters of my hide! Around 10 pm the sunset and half an hour later it was too dark to take pictures. 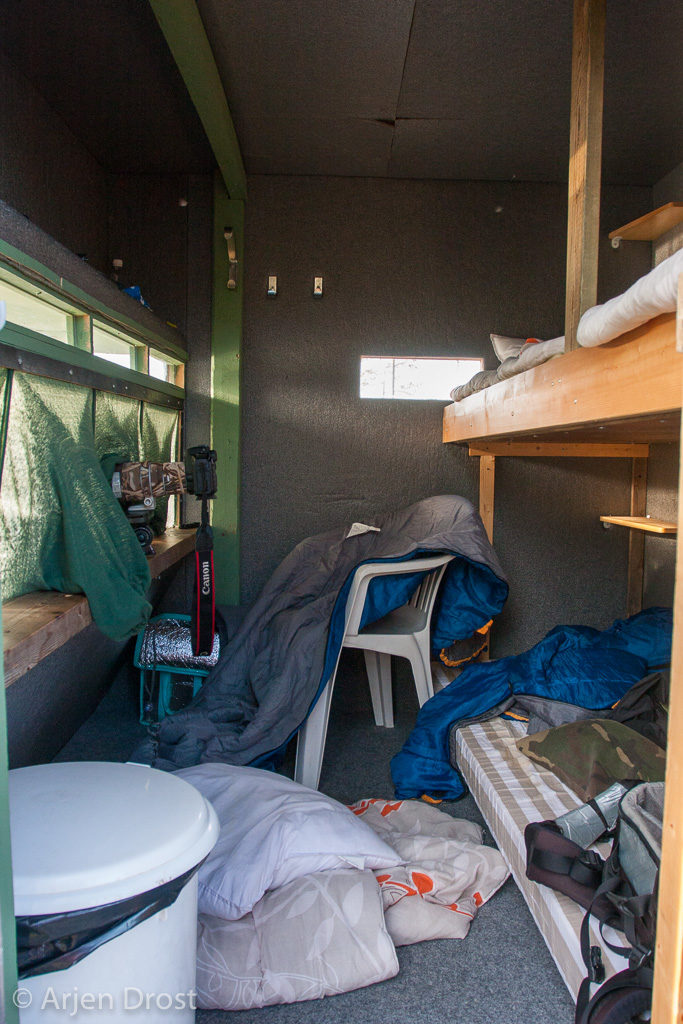 The inside of the hide. On the right there are two beds, on the left, you see the viewing windows and underneath the holes for the camera’s, covered with cloth. In the plank, there are holes to attach your tripod head. The white thing in the front is the toilet… 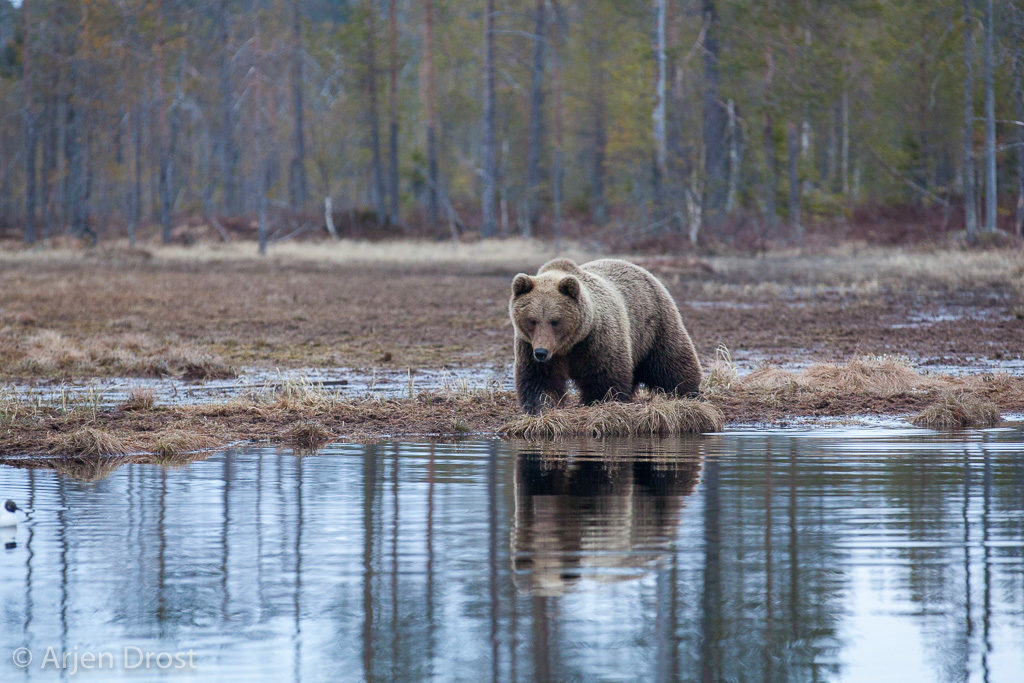 a Brown Bear at the lake

I had just crawled into my sleeping bag when I heard some noise outside the hide. I could just have a look through the viewing holes from my bed, and it turned out another bear was eating right in front of my hide. The next morning, I sat down again, ready for what was to come at 4 am, but no bears showed up this time. That was the case in most of the days I spent in a hide, the evenings were good, the mornings less. At 7 am a very satisfied me left the hide, finally being able to stretch again and to have a proper look at the pictures I took during that night. 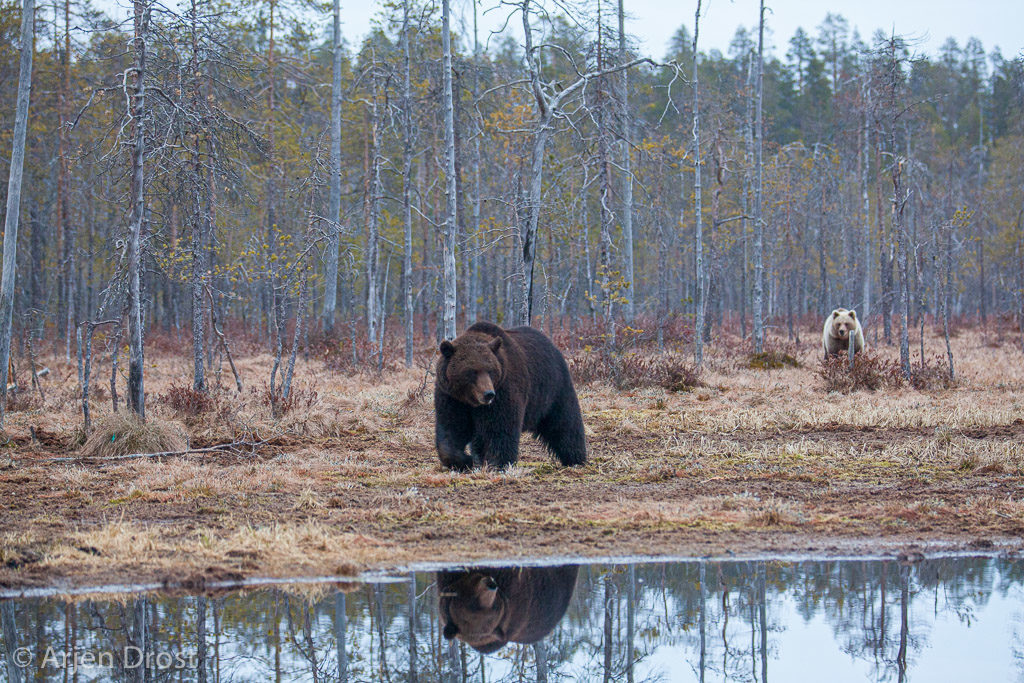 Two bears around the hide at the same time

The daytimes were spent with a variety of things, sleeping in my room, having a first look at my pictures, walking around, taking a sauna, sitting in the bird hide and one day I went to a lake with a pair of Red-throated Divers. But the nights were the main dish. Not all were as good as the first one. One night I decided to take a hide that was looking in another direction to get a different setting. This turned out to be a wrong guess. I could see the bears in front of the other hides, but none appeared in front of mine. Chances like that you have to take sometimes. Another night a group of students was also visiting the hides. Most of them were as quiet as I was, but some got bored after half an hour without bears. They started to walk around, smoke and talk to each other. Very frustrating as this meant I didn’t see any bears that night. The night wasn’t wasted completely, as the birds were still around. The Goldeneyes and Greenshanks weren’t that bothered by the people and were sitting on the lake right in front of the hide now and then. 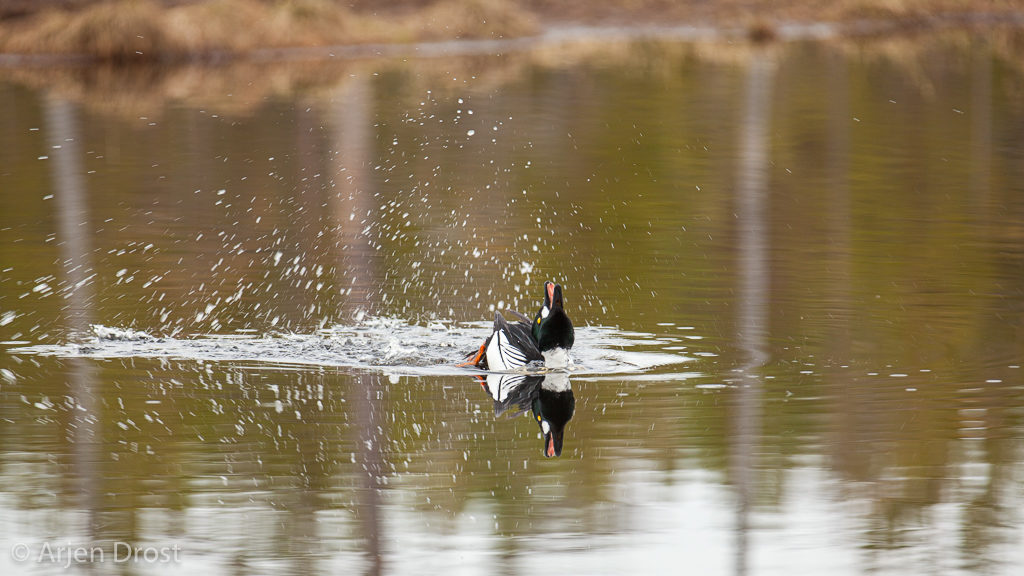 The last night, however, was very spectacular again. This was the first night when it wasn’t clouded so that I could take pictures of bears in sunlight. One of the hides has viewing points in all directions. This is a good thing, as you can take photos of everything. On the other hand this makes it also a lot more complicated as you have to keep an eye on all directions, which makes it very hectic. Therefor I decided only to pay attention to what was happening in front. The night started very well, with a large male eating only a few meters away from the hide. When he was gone, I had to wait for a while. In the corner, I could see a mother with four cubs walking along the shore of the lake in the beautiful evening light. I switched to another side of the hide to take pictures. No close ups, but nice with the whole family and reflections of the birch trees. Another great night! Slowly they came into my direction. Until…. they suddenly ran off, a big male had appeared again and the careful mother didn’t want to take he chances and took off. 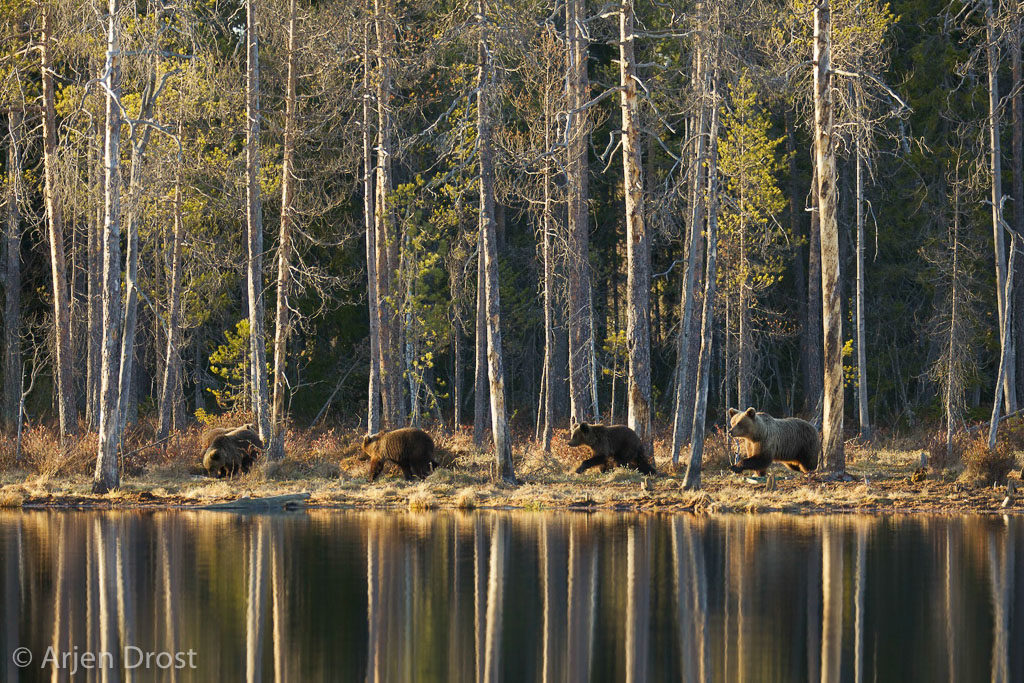 Bear family along the lake

Around 9 pm, an hour before sunset, it was time for a cup of tea. It was getting quiet and I was thinking back on the spectacular nights I had the previous week. In total 11 different Brown Bears, most of them seen several times, nice birds, nice people to work with and it was great to be able to focus completely on photography for a whole week. Ok, I didn’t see Wolverine, but well, I couldn’t really expect that in my first week… That only means I have to come back one time, something I had planned already anyhow. While I was thinking this and pouring my tea, I suddenly saw some movement on the left hand side. I quickly put my tea away, had another look and saw a real Wolverine walking in my direction. I was so shocked that I even forgot to take pictures until the animal had almost disappeared in the forest.  I waited for a while, it might show up in front of my hide?? But after 15 minutes, I went back to making my tea, even more, happy now. I had just put the tea bag into the cup when I saw the Wolverine again, now only 20 meters away and directly in front of my hide! I could really scream of joy, but I knew that would scare it away and any other animal in the area. Now I was quick enough to get my camera and managed to get a few pictures and even a movie before he went away again. For me, this was probably the most happy moment I ever had as a photographer and the end of the trip. After I finally finished my tea, two more bears walked by, but I really couldn’t be interested anymore. I took a few pictures because I had to, but the trip was already a complete success. I managed to see both Brown Bear and Wolverine! 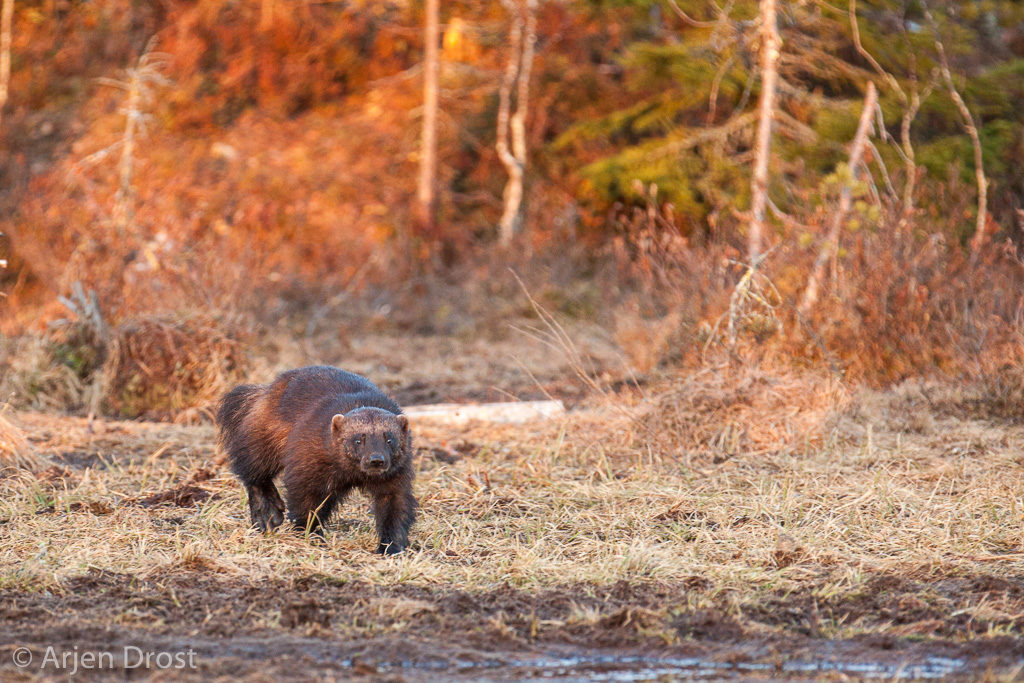 the highlight: a Wolverine!!

The next day Ari brought me back to the airport again and I flew home. One of my nicest weeks as a photographer had ended, but I know for sure I’ll be back some time (next year?).

A short video impression of this trip.

Predators of the Taiga from Arjen Drost on Vimeo.