In search for Muskox 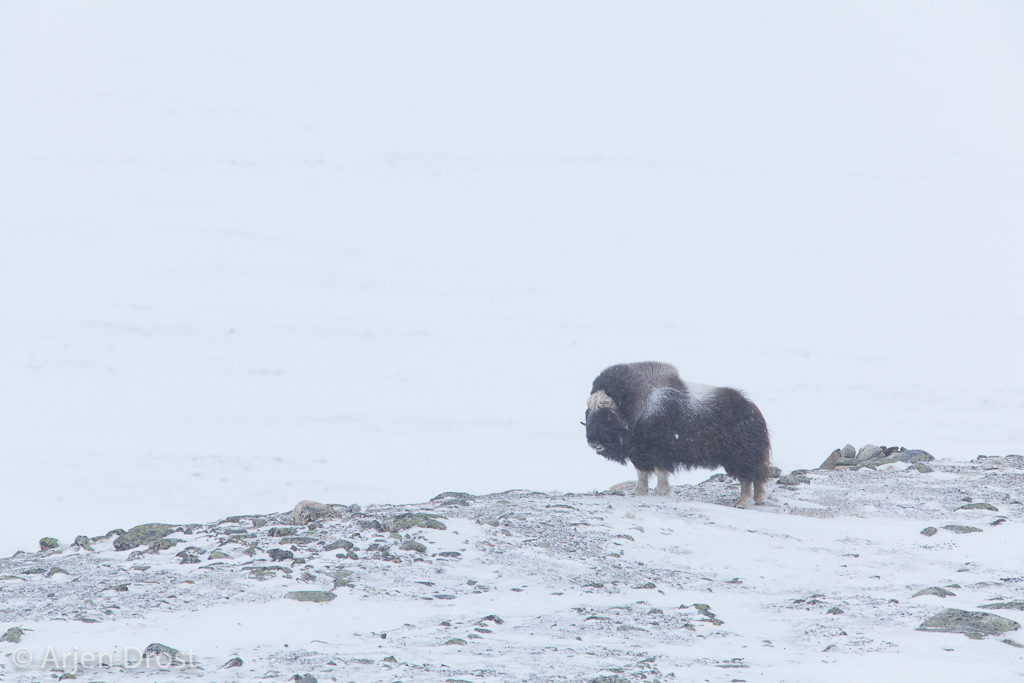 In the autumn of 2009, I was thinking about plans for the winter. A long-time plan of me is to go to Scandinavia in winter and take pictures. With a Swedish friend of mine, Ingvar, I discussed different options: Wolf, Bear, Wolverine… All really nice mammals, but also really hard to find. So we thought of an animal a little easier to find: the Muskox. I had seen them in east Greenland in summer, but never under the harsh conditions of the polar winter in the mountains. The nicest place would be to go back to Greenland, but that would be too expensive for only one week, so we decided for Dovrefjell, Norway. They have re-introduced Muskoxen there and the population numbers into the 300 animals. 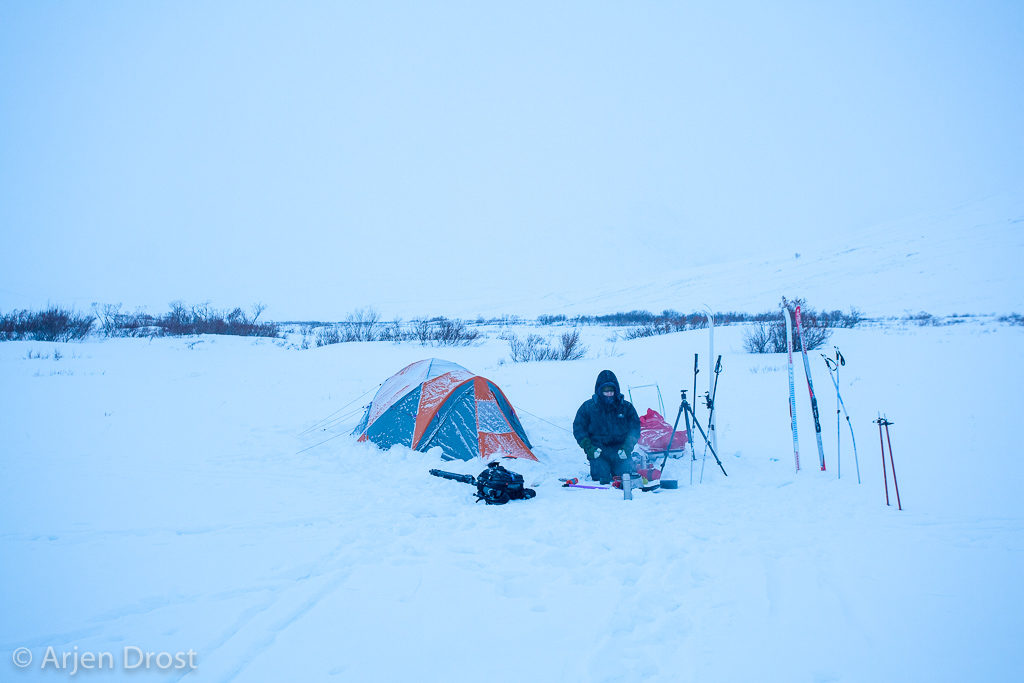 Ingvar melting snow in the evening

After some months of preparations, we set off in the last week of February 2010. After a long ride by car from Falun, Sweden, we reached Dovrefjell in the afternoon. So we still had time to do a little before it would get dark. We decided to follow a summer trail. A bad idea as it turned out. The snow was really heavy to ski through, both for the inexperienced me as for the experienced skier Ingvar, pulling the sledge. That night we set up our tent, discussing what to do next. Continuing this way didn’t look like the best idea. But giving up before we even saw a Muskox didn’t look too appealing. That night also turned out to be the coldest of the trip, with -30°C outside the tent. 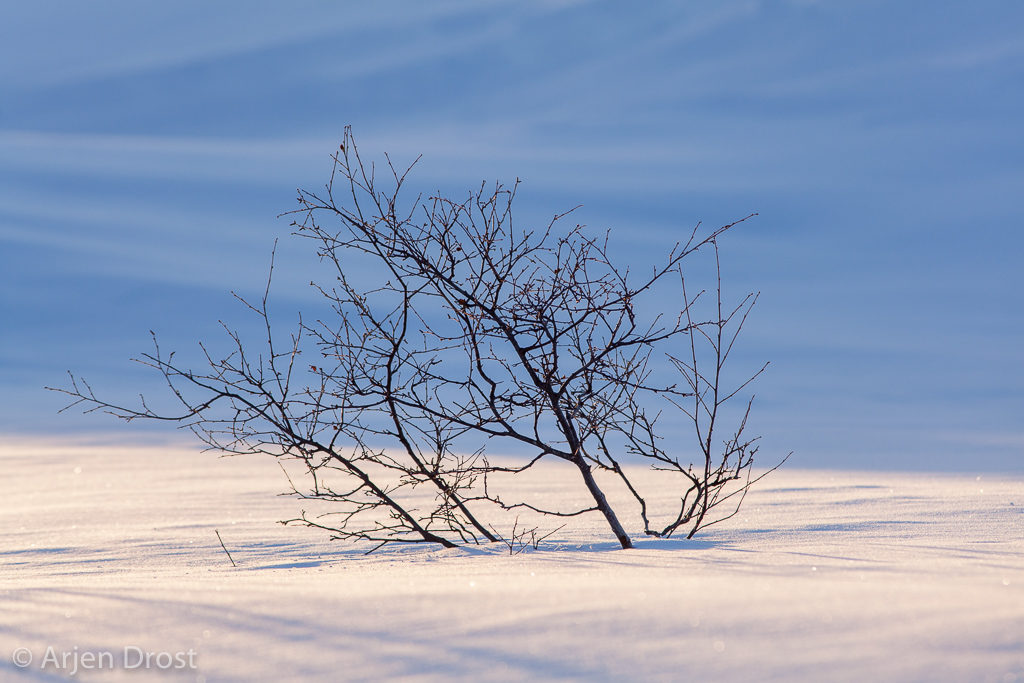 Willow in the snow

The next morning we were about to start discussing what to do next when Ingvar found 3 Muskoxen on a mountain four kilometres from our camp. This made it clear what we had to do. We went back to the car, parked a few kilometres down the road and took a steep winter track into the area. 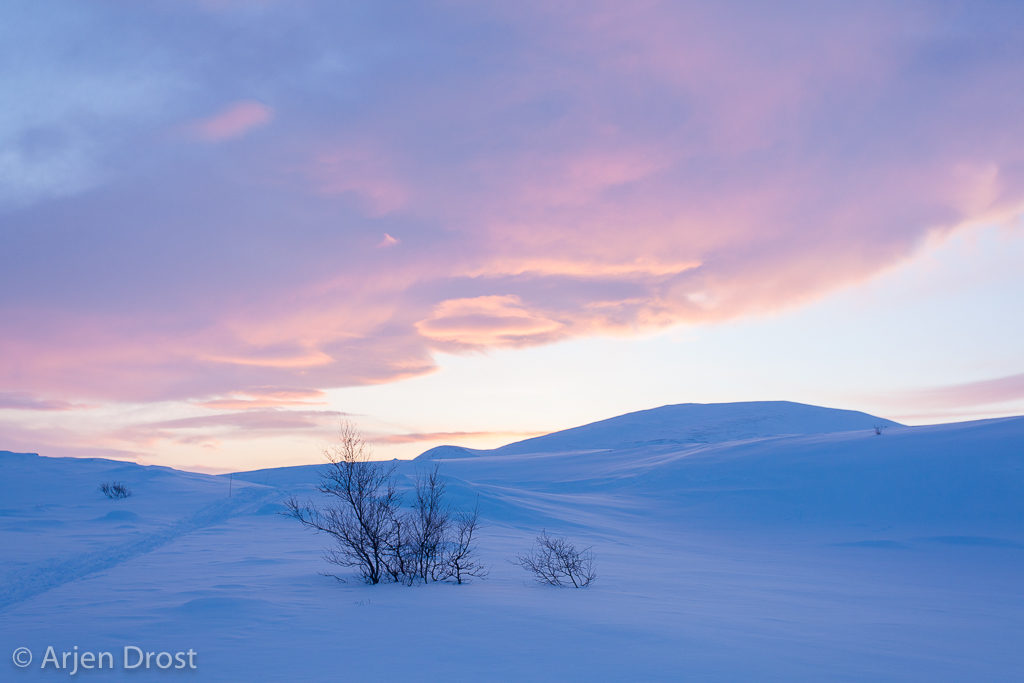 Sunset in the white fjalls

We parked the car at Kongsvoll Fjellstue and set off on the winter trail.  We now faced a steep climb a hill, nothing for skies, just walking and pulling the heavy sledge.  This took us the better part of the morning and the beginning of the afternoon. Above the treeline, we set op our camp and spent some time taking pictures of snow, trees and sunsets. The next day we spent all day searching for Muskoxen. The ones we found the day before appeared to be gone, but we found nine animals on another mountain. As the wind picked up, we decided to go back to our tent and move the camp the next day. This was quite easy as the animals were fairly close to the winter trail. Now we could see the Muskoxen from our tent, a little uphill on a ridge. 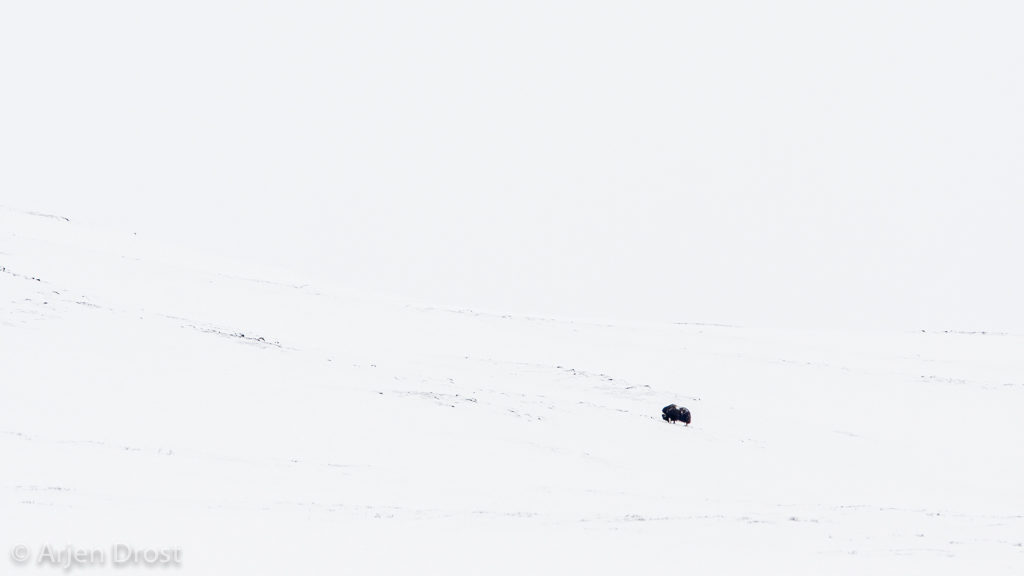 Muskox in a white world

After we made camp we still had a few hours of daylight left. We decided to make the best out of it and make a first dash for the oxen. The sun was shining, but as the animals were sitting on the north slope of the mountain they were in the shade already. The wind was quite strong, blowing some drifting snow over the mountain. This resulted in a great photo opportunity, but unfortunately, one that I didn’t take. I saw a thin layer of drift snow come over the mountain, being backlit by the low sun… But in my hurry to get to the Muskoxen, I didn’t want to stop for it… I never saw it again… 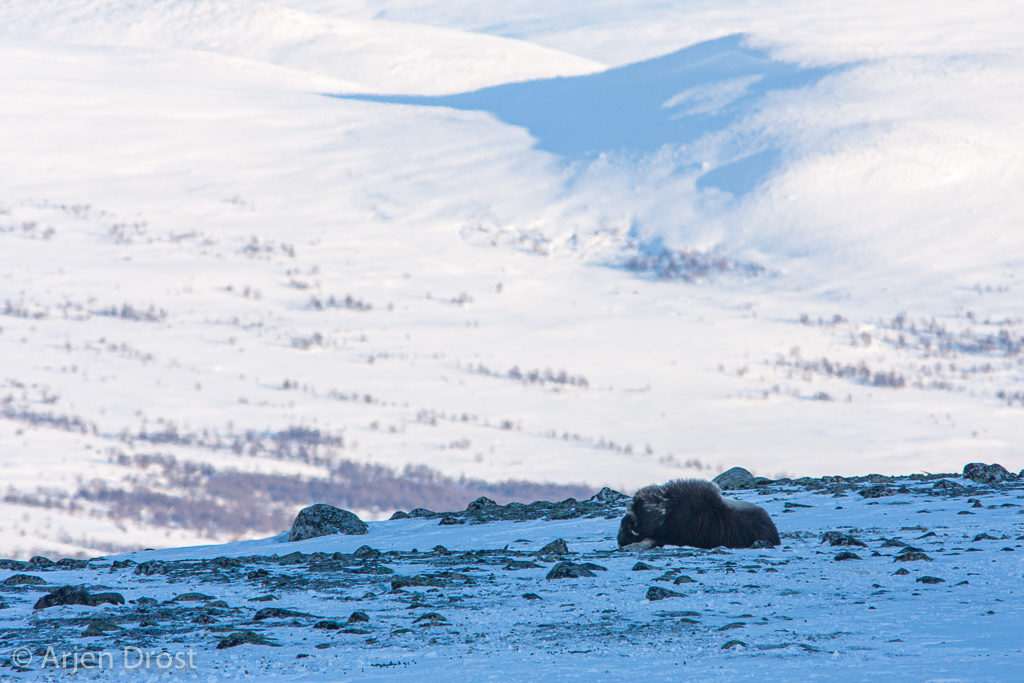 Our first close encounter with a Muskox

The Muskoxen were a bit more cooperative. Three oxen were resting on the ridge. We approached them slowly (on foot of course) from a little elevation. Sun in our back, but not trying to hide too much. If the animals notice us in advance, they can more easily show that we were coming too close and we wouldn’t scare them. This worked really well as we could get reasonably close without getting any reaction at all… We decided not to push it and risk the chance of scaring them. Wouldn’t be good for the animals and not for us. They can become aggressive and if we chase them, we wouldn’t have another chance the next day. But we were really happy with our first real encounter!! 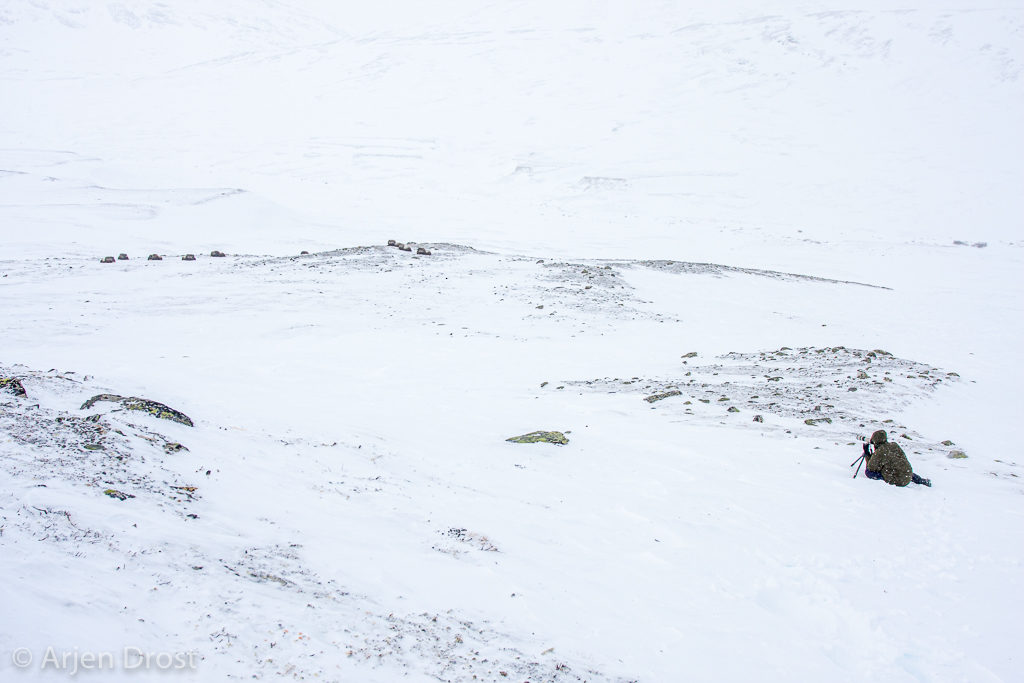 The next day the weather had changed. No sunshine anymore, but snow and wind. This was good as we wanted to capture the harsh conditions these animals had to live in. The way up was a lot harder as yesterday, but eventually, we made it. Coming from the other side (with the sun in our back, if there would be one) we picked an even higher ridge as the day before. This time there were nine oxen waiting for us. Not doing a lot (as is usual with these animals) it was quite hard to take interesting pictures and movies. But after a while, some started to feed and walk around a little (without seeming to be disturbed at all by us), so we had some different opportunities. 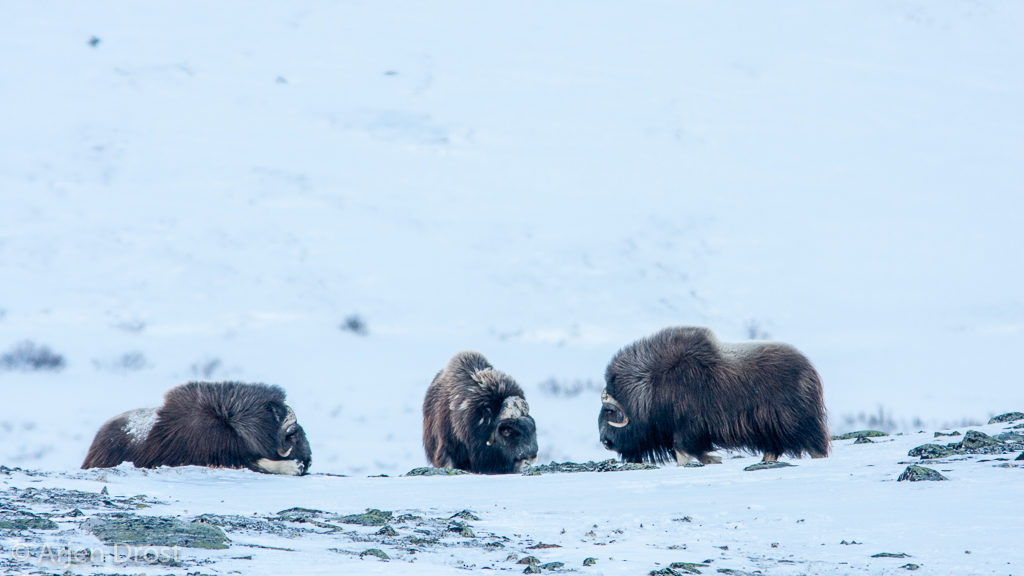 Muskoxen in the snow

After a few hours, we got really cold and decided to go back to our tent. As we were both really satisfied already with our pictures, we decided not to go back to the oxen the next day. A good choice as another photographer had made his way up and was less successful in approaching them undisturbedly… The way back turned out to be quite easy so we even had time for an unsuccessful search for Siberian Jays in Sweden. 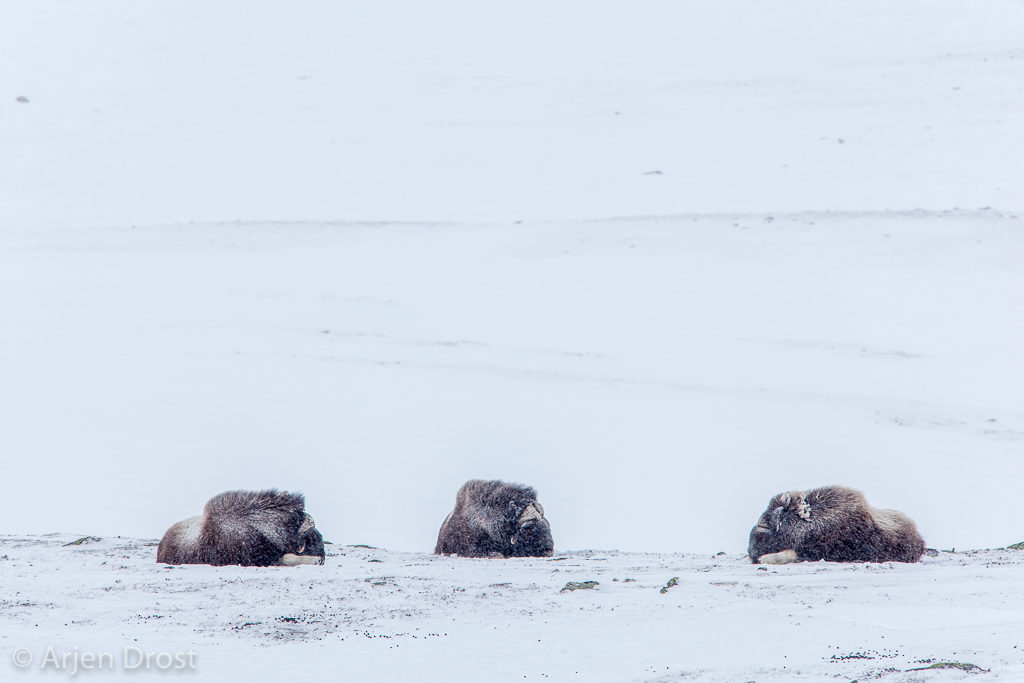 All in all a really successful trip with nice pictures and great first experience in winter camping for me. 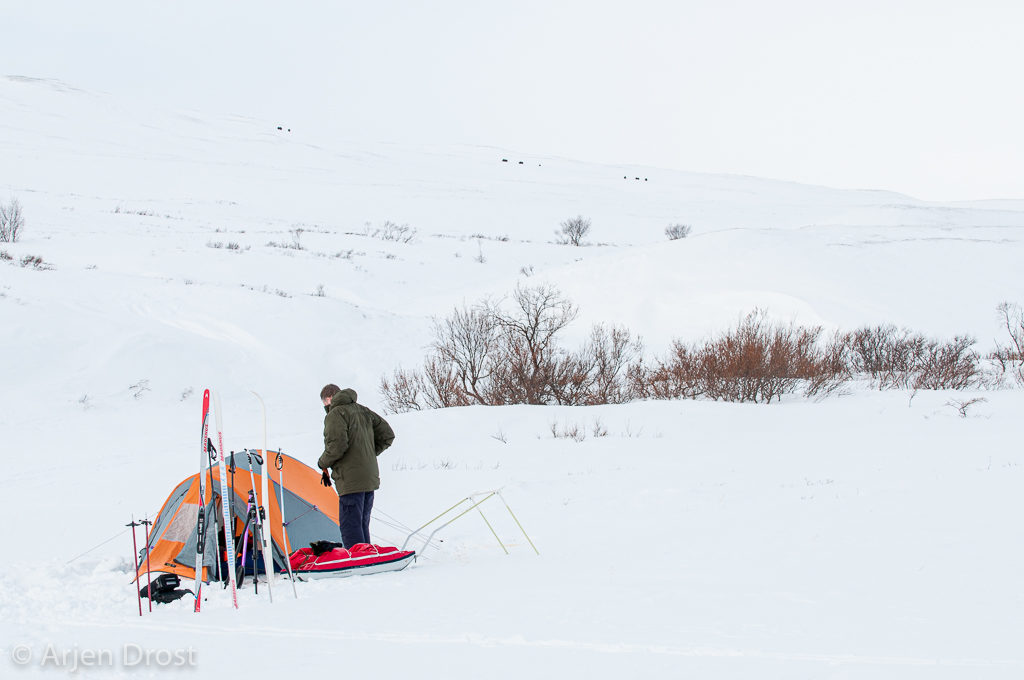 at our camp (© Ingvar Schon)

A short video of this trip (I know, they didn’t move a lot…).