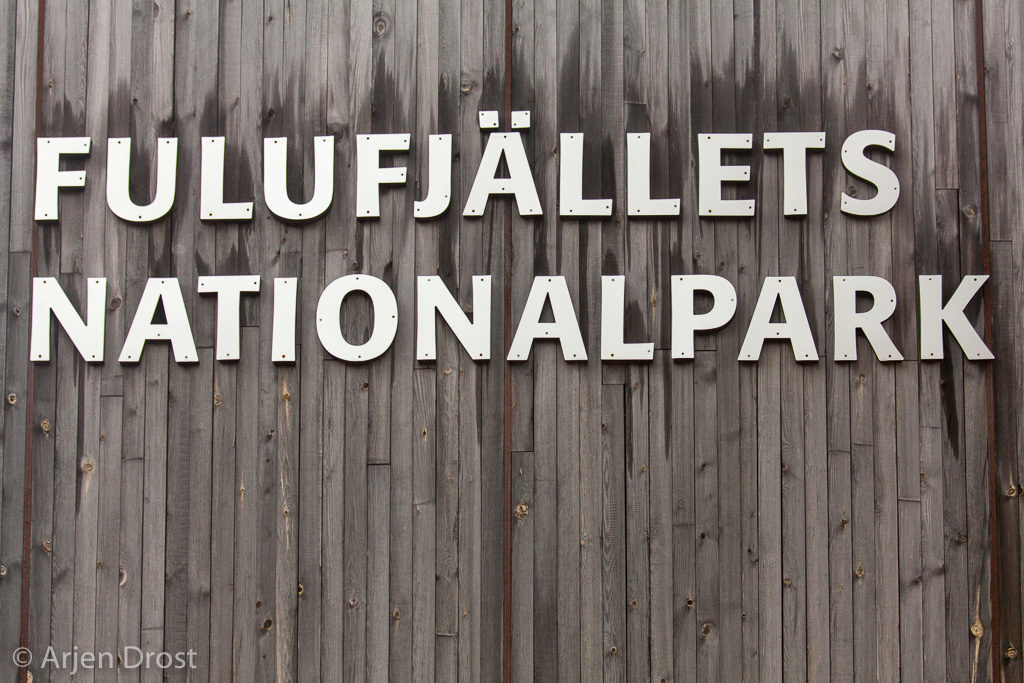 The past years I’ve been working on a project for a new lecture: “from Taiga to Pack Ice“. For this lecture, I had enough pictures of the tundra and the pack ice, made on my trips to Spitsbergen, but I was still missing some taiga pictures. This was one of the reasons for my trip earlier this year to Finland, but I needed more. I needed some general taiga pictures and would love to have images of a Moose and Siberian Jays. In my previous visits to Sweden, I had seen a few Moose but never managed to get good pictures (not in the digital era at least). The same was true for Siberian Jays. Together with Ingvar, I came up with a plan to visit Fulufjallet NP on the border with Norway. This national park consists of a vast old-growth forest with a plateau in the middle. I’ve been there twice before, once hiking on the plateau, once after we returned from Dovrefjell for our Muskoxentrip. This time I would go in summer and spent the most time in the forest. The first days Ingvar would join me, the last two I would be on my own. 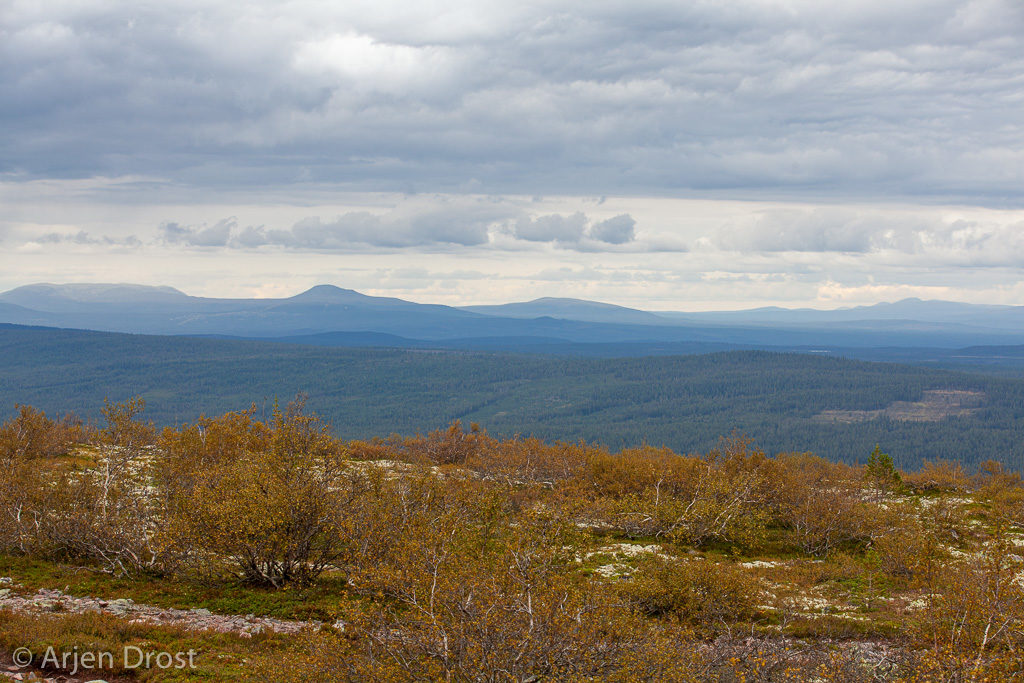 the plateau and the forest 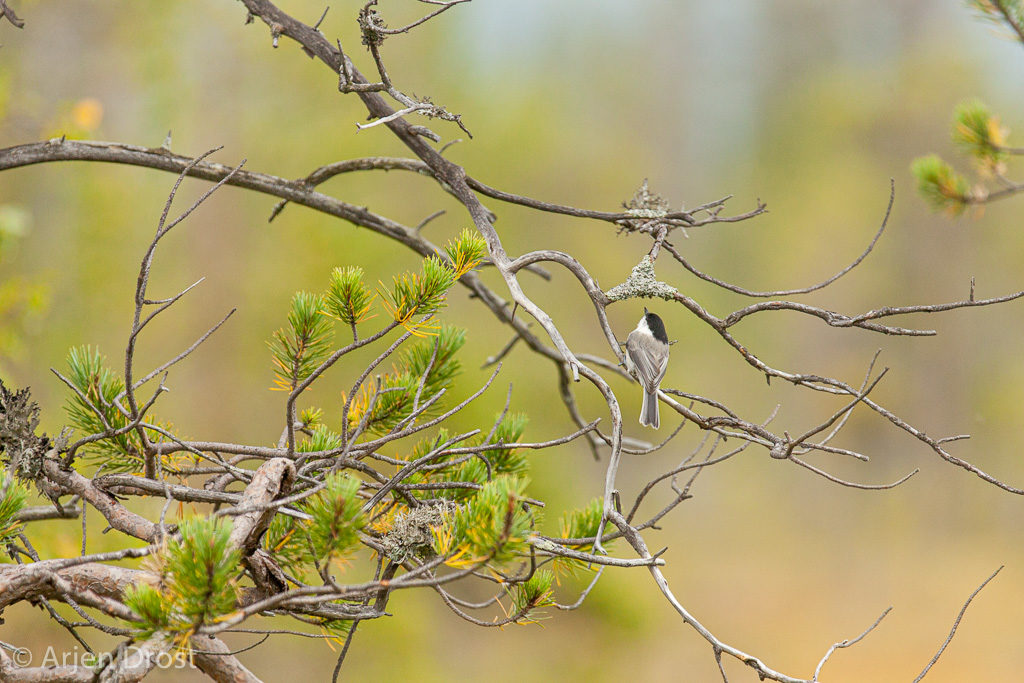 We started at the visitors’ centre, the place where we expected to find Siberian Jays. Well, this worked out fine. The first bird we saw at the car park was…. a Siberian Jay. Unfortunately, he flew away before I could take a picture, but this was promising! As the bird was gone, we decided to walk around a little, enjoying the lovely scenery around the visitors’ centre. After a while it started to rain, so we headed for the shelter of a hut nearby. While we had something to eat, we suddenly heard and saw something outside. There was a family group of Siberian Jays around! Despite the rain, we went outside, put some bait out to attract them and took out our camera’s. After a while, the birds found the bait (small pieces of sausage), and they started to come back to our hut. I placed an old branch on a picnic table and put some of the sausages on it. Now we could sit dry inside the cabin and still see and photograph the Jays.

bog on a rainy day

After a while, the birds left and with the rain, we couldn’t make decent pictures anyhow. We decided to drive around through the forest for a bit in the hope to find a Moose. We ended up in Gäljån, a part of Fulufjället NP where a whole forest got flooded and partly washed away by a great flood in 1997. It was nice to see all the lichen in the woods and all the dead trees were scattered everywhere, slowly being retaken by nature. After we followed the nature trail there, we went back to the car and continued driving around in search of Moose and grouses. 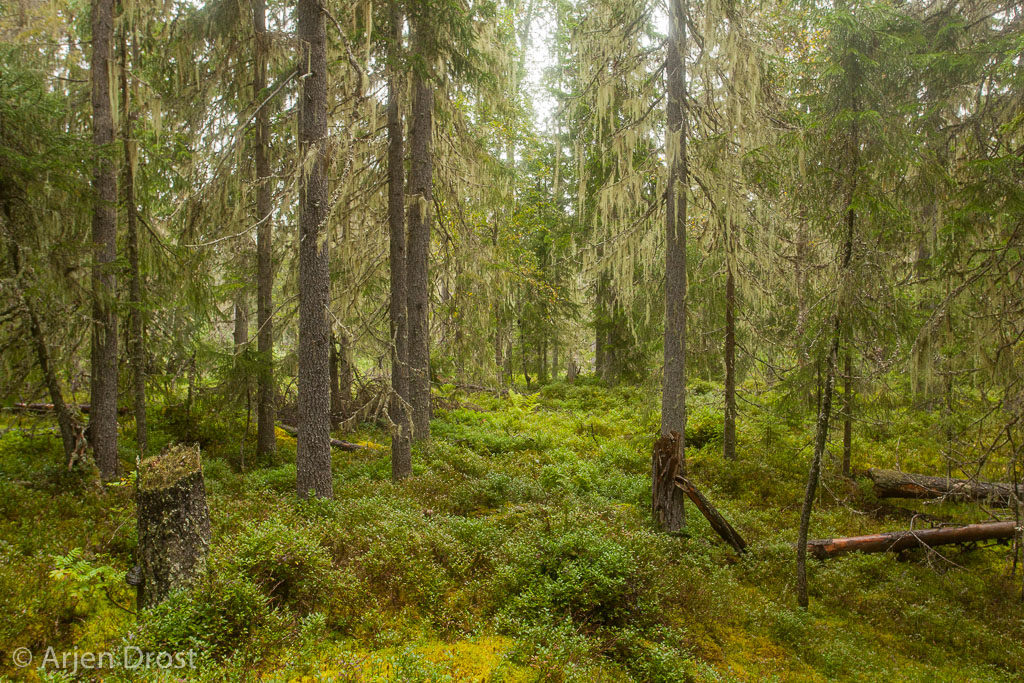 When this had no success, and it was almost dark, we had to find a place to spend the night. This wasn’t easy as we were not allowed to camp anywhere near the visitors’ centre. Fulufjället NP is divided into several zones, and in the zone around the entrance roads, you’re only allowed to walk. So we had to park the car somewhere and walk uphill until we were out of zone IV. This took a while as it isn’t easy to walk with a lot of gear in darkness over a track that you don’t know. We knew there would be a wind shelter at the beginning of zone III. When we reached that zone, none of the three shelters could be found… So we decided to put up our tent at a place that looked a little flat. 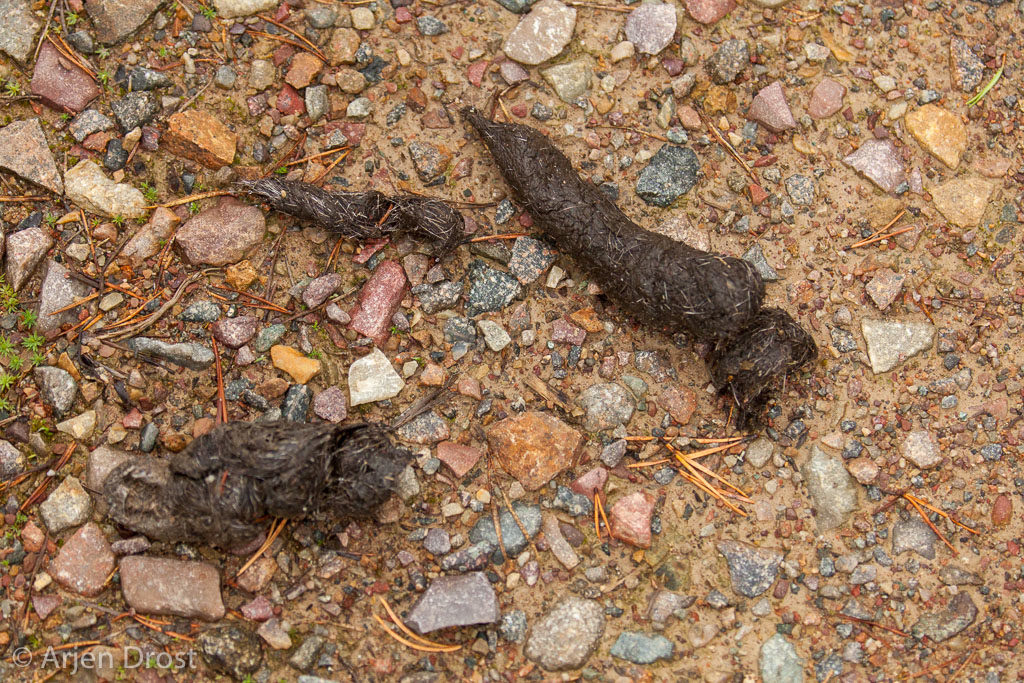 The next morning it turned out one of our shelters was about 50 meters away, so we decided to reposition our tent there. The weather was still shitty, with a lot of rain and low clouds. Not the weather we hoped for. We decided to make another grand tour through the forest. Again we found some Capercaillies and Willow Grouses on the road, but still, the conditions didn’t allow for good photography. We took some time shopping and visiting the visitor’s centre, and I started to wonder what I would have to do when Ingvar left with his car… During our evening ride, we found some droppings that were probably left behind by a Wolf, my first signs of this animal. The animal itself stayed out of sight, unfortunately. When we walked to our camp that evening, the skies cleared and we had a beautiful evening. We spent the evening at a small campfire near the shelter and now and then we went to a small hill to enjoy the scenery and take a few pictures. 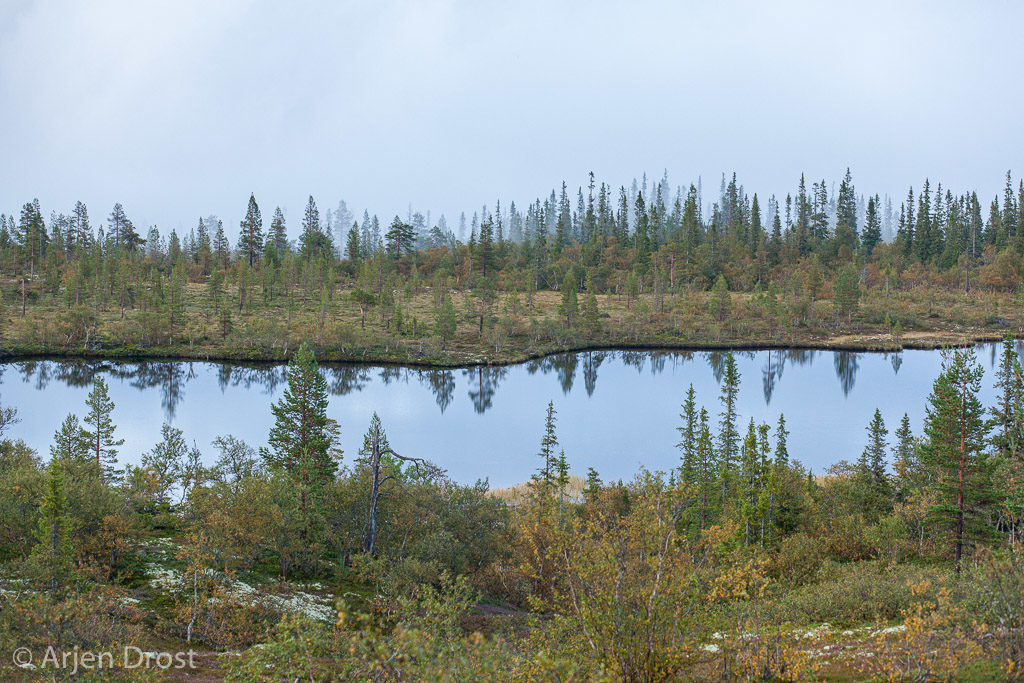 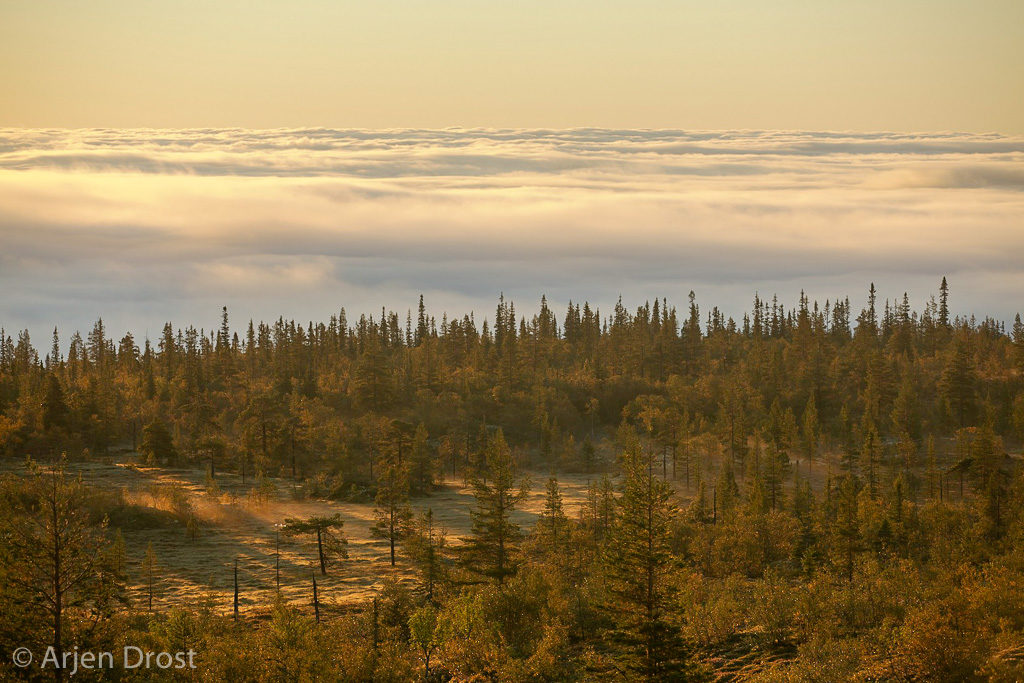 Sunrise over the taiga

The next morning we put our alarm clock before dawn, so we could have a look at what the sunrise would bring. Well, was that spectacular!! When we got up, the first light was already visible on the horizon. Where we were standing the sky was clear, we could just see the last stars fading out. The forest below us, surrounding the plateau, was covered in clouds. From where we were standing, we could look on top of those clouds towards the horizon. Soon the little light at the horizon had turned the horizon in fire. The last seconds the sun rose above the clouds, the horizon got a golden edge. In a few seconds, it was gone, and the sun was above the horizon. Now we turned our attention from the skies to the landscape around us, nicely lit by the low sun. After some time the sun was high enough above the horizon for that lovely morning light to be gone, so we decided to go back to the visitor’s centre in the hope to see the Jays again. 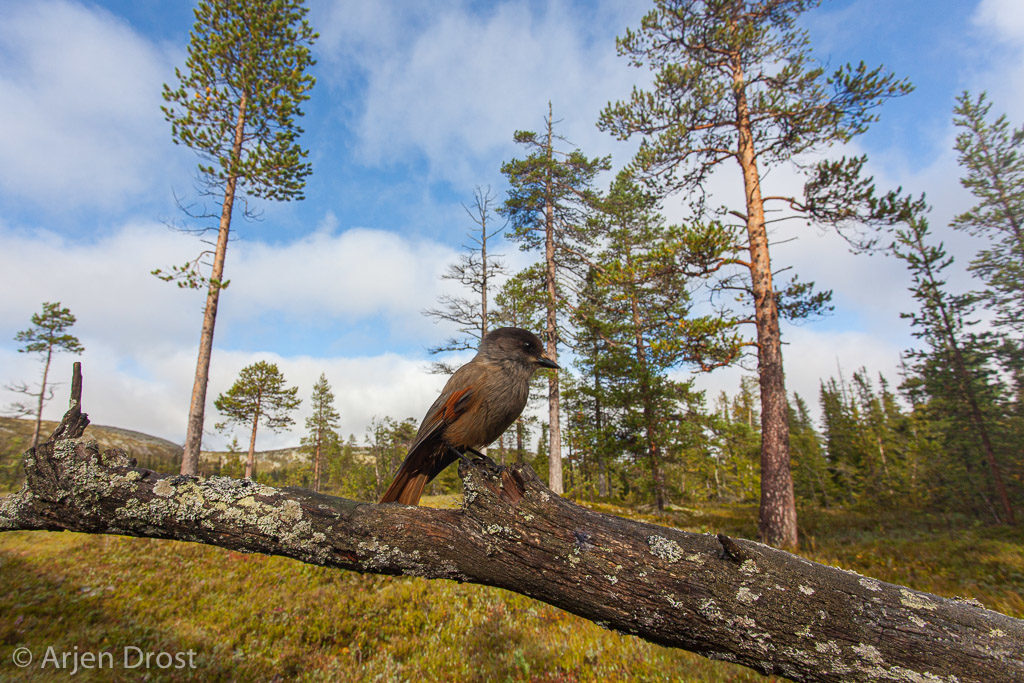 As the visitor’s centre was at the foot of the plateau, it was still covered in clouds. However, with the sun gaining in strength, more and more of the clouds disappeared. We found a nice old branch, put some sausage on it, and the wait could begin… Not before long the Siberian Jays had found the bait, and we had a whole family surrounding us. It turned out they weren’t shy at all. Sometimes they even sat on our hands if we stretched them out… This made it very easy for us to take pictures. However, I found it hard to make good ones. The light was not ideal, and something was missing, I just didn’t know what. After some time the park became alive with more and more visitors, so we decided to pack up. Now it was time to walk towards the waterfall, Njupeskär. The highest waterfall in Sweden, with a drop of 90 meters. 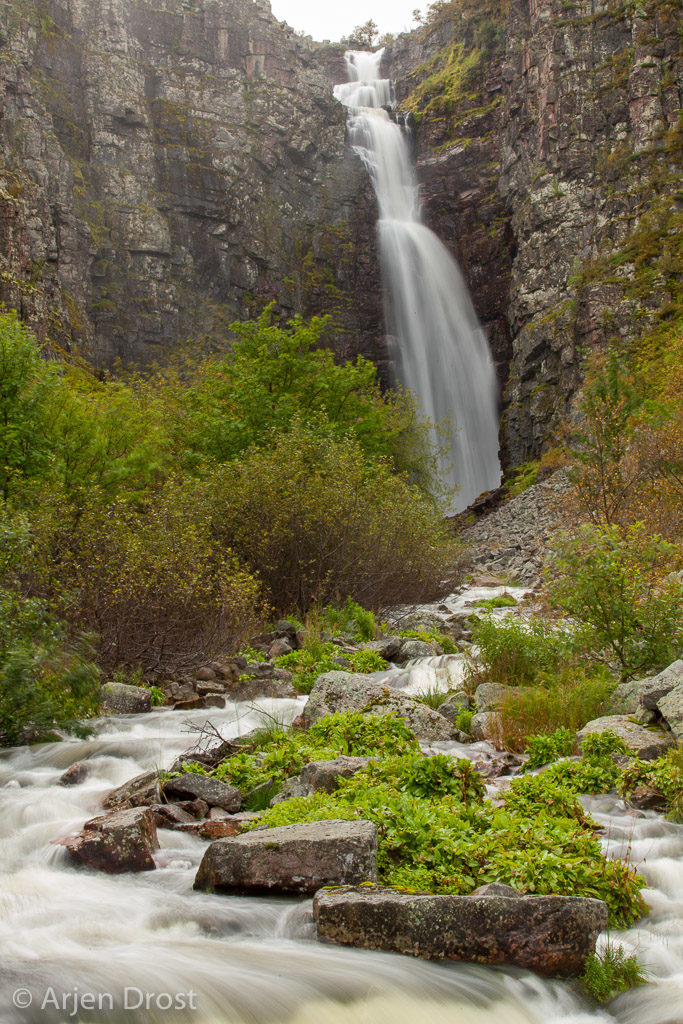 The way to the waterfall went through a nice part of an old forest. We kept our eyes open for Dippers in the streams, but couldn’t find any. The waterfall itself was spectacular, of course. It’s great to see a waterfall from such a hight. When we continued our walk, I kept on being amazed by the large anthills around us.  That afternoon we drove around the forest again, finding another few Black Grouses and Capercaillies and this time even a few Moose. Unfortunately, it was too dark for good pictures when we saw the latter. 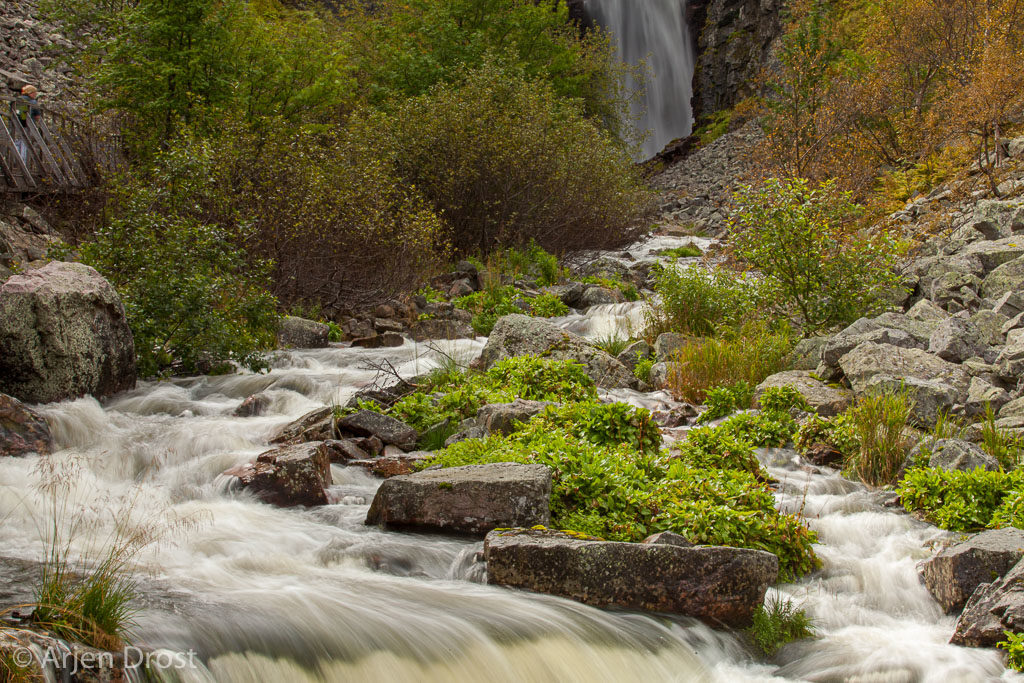 the stream underneath the waterfall

The next morning Ingvar left me, which meant I had to find a new place to camp, one I didn’t need a car for. The place I had in mind was on top of the plateau near the Njupeskär waterfall. This only meant I had to pick up all my camping gear and my photography equipment and walk up. But before I would do this, I decided to stay a bit around the visitor’s centre, in the hope for more Siberian Jay pictures. I found another nice branch, this time, one that laid on the ground, and placed some sausage on it. This time I had to wait a while before it was noticed, but now I could take nice pictures and shoot some more video. The place with light up a little by the sun and the birds kept coming back. 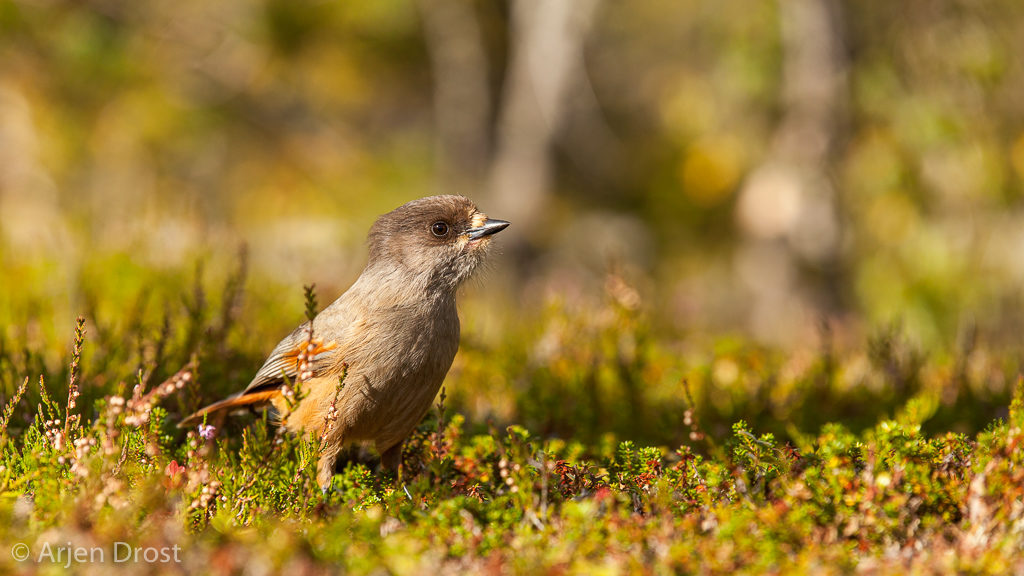 Siberian Jay on the forest ground

This lasted for quite some time and then it was time for me to head uphill. After quite some time I arrived on the plateau and then the search for a nice, and legal, place for my camp started. Eventually, it was almost dark already, I found one close to a lake, not far from the top of Njupeskär. The next day I wasn’t feeling too well, so I stayed in bed for most of the day, sleeping and reading a little. I only took a few pictures of the lake and the surroundings of the tent. The day after everything was ok again. This would be my last full day in Fulufjället, so I wanted to make a nice hike and take some good pictures. I made the grand tour around the waterfall, seeing some Ring Ouzel, a Merlin and some more Siberian Jays and some very spectacular scenery. Back on the plateau, I extended my tour with a walk around the large lake next to my tent. I hoped to find some Golden Plovers, for me the most typical bird of the Scandinavian fjalls, but they appeared to be gone. Despite this, it was still a nice walk. 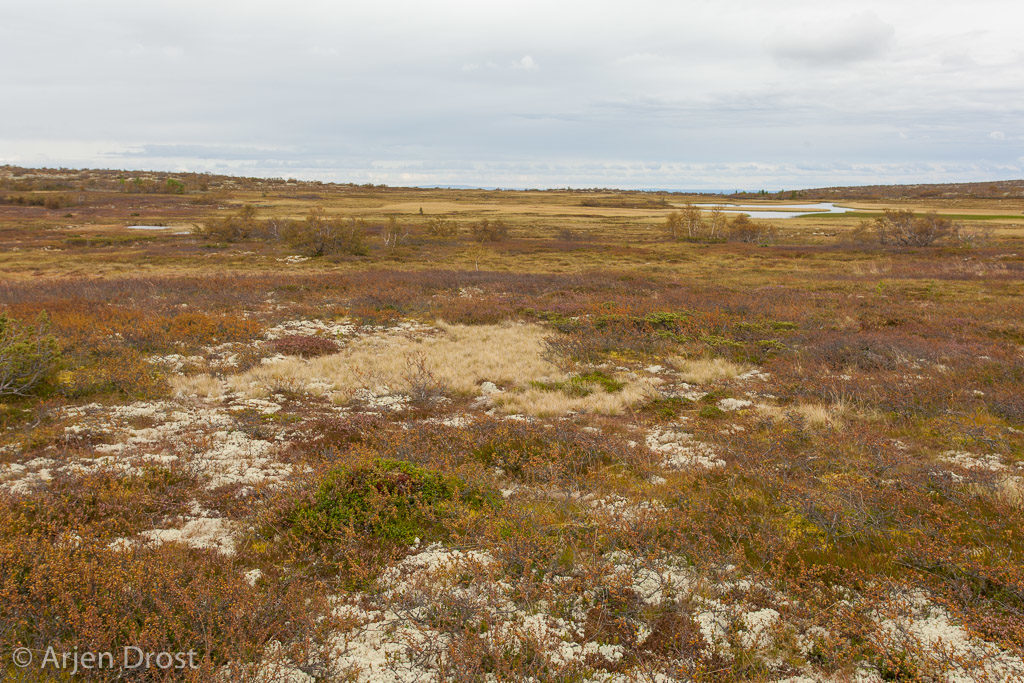 The last day was just packing up, bringing all my gear back down, hiking back to civilisation in the hope to hitch a ride to a bus stop (which was 40km away from Fulufjället) and getting on the train back to Ingvar. This all succeeded, so I could spend the evening with Ingvar and catch my plane back home the following day. Home, where I could start selecting and editing pictures and movies and look back on another successful trip. 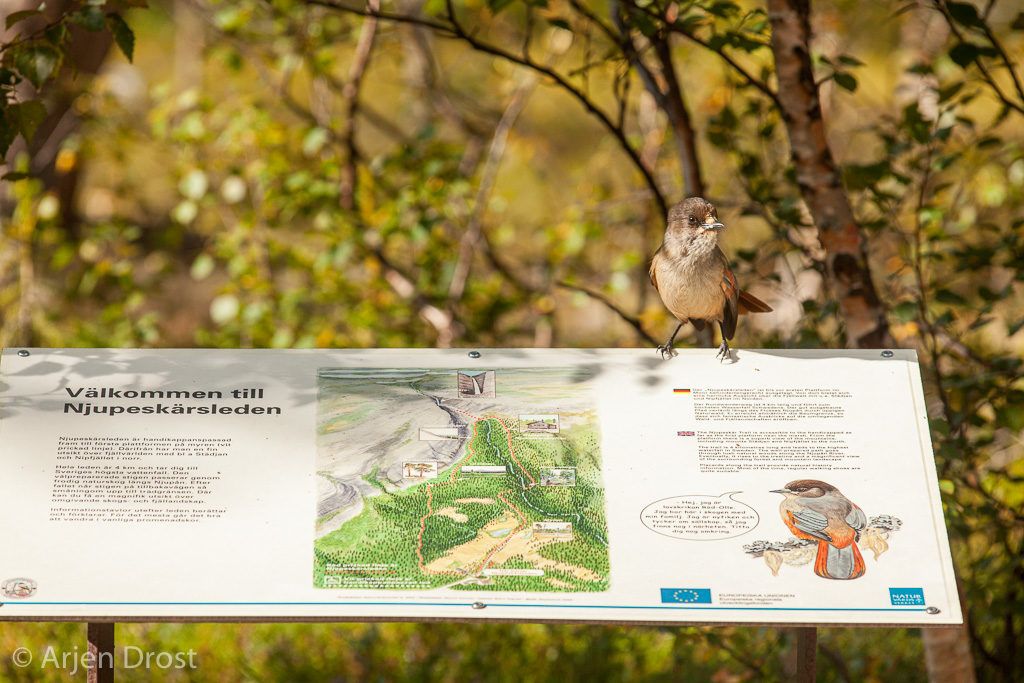